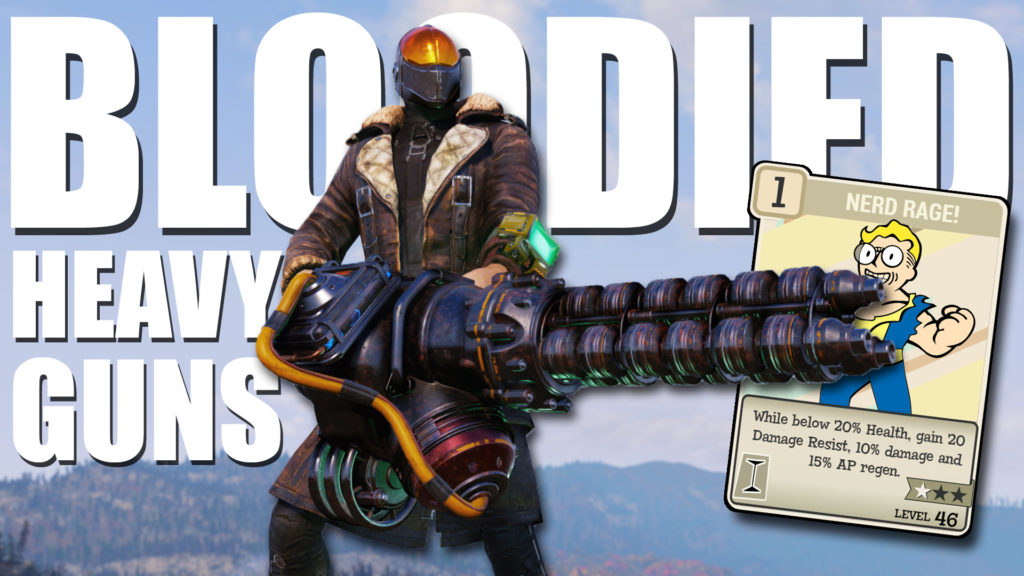 Bloodied builds are arguably the most dangerous to run, yet most rewarding (damage wise) in the game. To build a GOOD Bloody build, you need to be prepared with damage reduction and the best possible gear to make you kill enemies faster than any other build in the game, and with a Bloodied Heavy Guns build, you will absolutely shred anything in Fallout 76.

Before I continue on, I’m going to express my personal opinion here. Although Unyielding armor is a fan favorite and people generally don’t care much for wearing power armor, Stabilized is one of the best perks if you’re using heavy guns, and almost makes it a final choice to wear power armor as a Bloodied Heavy Gunner build. Not only that, I HIGHLY recommend joining up a team, even if it’s just a random team, doesn’t matter, Strange in Numbers will amplify your Adrenal Reaction, meaning even MORE damage.

So, in short, Power Armor IN a Team, to me, is the best viable option for highest damage output as a bloodied build.

As a Bloodied build, your MAIN Legendary Effect should only be one thing: Bloodied. Other than that, you can mix and match the tier 2 and 3 effects to your liking, but here is what I recommend:

When it comes down to armor, you have 2 choices and there is one better than the other, you just might not like it. Power Armor is substantially better as a Heavy Gunner build not only because of the tankiness it provides, but the Heavy Gunner perk until Intelligence called “Stabilized”. This perk alone makes it worth rocking Power Armor over regular, BUT, because I know a lot of folks prefer no PA over wearing PA, I have both armor types available to look over.

On top of this, Bloodied Power Armor Builds, like I mentioned above, are the best viable option for high damage output, so remember that when looking this over.

Just like regular Armor, Power Armor also has it’s “better” versions that are pretty much just superior to the rest. If you’re rocking Power Armor with you Heavy Gunner’s build, you’ll want to get T-65. The T-65 Power Armor provides the absolute highest amount of damage resistances as possible, but also costs a fortune in Gold Bullion to purchase all the plans, so once again, use what you can. T-60, X-01, and Ultracite Power Armors are quite easy to come across just by completing the Enclave and Brotherhood questlines.

The WORST thing about Power Armor is that it can be a chore to obtain exactly what you need, so if you’re struggling with acquiring mods, just use what you can.

Thing about Magazines is that there are SO MANY of them that is can make it difficult to pick and choose between them all, whereas Bobblheads are quite a bit easier as there are FAR less. Here are just my few suggestions: