One of the best things about Fallout 76 is that (typically) there’s always a really fantastic way to grind for valuable resources. In this case, we’re talking specifically about AMMO.

Now, in this scenario, all you need to be able to do is complete the Daily Ops, either Solo or with a Group (USE THE GROUP FINDER, HONESTLY). So, as long as you can do that, you’ll be farming all that Ammo in no time.

I’m not gonna try and make this the longest guide you’ve ever had to unnecessarily read, because doing this farm isn’t complicated whatsoever.

Before I say anything else, remember that you NEED to be using the weapon with the Ammo type you want to grind for in order for this to work. So, if you’re farming for 5.56, you’ll want to be using any rifle that fire that specific type of ammo.

Your first job is to simply complete a Daily Ops, hitting absolutely EVERY single enemy you possibly can along the way. If you don’t at least deal a bit of damage to the enemies, they often times won’t drop any loot for you.

Once you’ve complete the daily ops, you’ll notice that, unlike other enemies in the game, all THESE enemies you’ve killed have dropped a good amount of Ammo, specifically the ammo you used to kill them! It can vary how much Ammo they drop, sometimes they’ll only drop a couple, whereas others can drop up to (as high as I’ve personally seen) 24 rounds! After you’ve killed a solid probably 50-100 enemies in the Daily Ops, that number racks up REAL quick.

Some of you might be already queuing up for Daily Ops right now, excited to not have to grudgingly farm resources to craft ammo yourself (especially that Ultracite ammo, which the enemies ALSO drop!). And some of you might’ve already figured out what I’m about to say.

Like I mentioned earlier, you need to be pretty good. Good enough to either complete it solo OR in a group. If you’re going in here to grind ammo, not specifically to grind the rewards, you need to be able to kill these enemies VERY quickly with VERY little Ammo. The more Ammo you use to kill these enemies, the less beneficial this tactic works. I mean, I’ve gone into Daily Ops with my Ultracite Plasma Caster, killed each enemy in less than 2 or 3 hits (sometimes 1 hit if I have all my buffs in place), and I seriously reap the rewards of free Ultracite Plasma Cartridge Ammo. But if you’re using up anymore than 30 shots per enemy, and even that’s being generous, you’ll still get ammo back BUT that defeats the purpose of this being a “Farm”.

SO, in conclusion, be good, hit enemies hard, and reap the rewards. 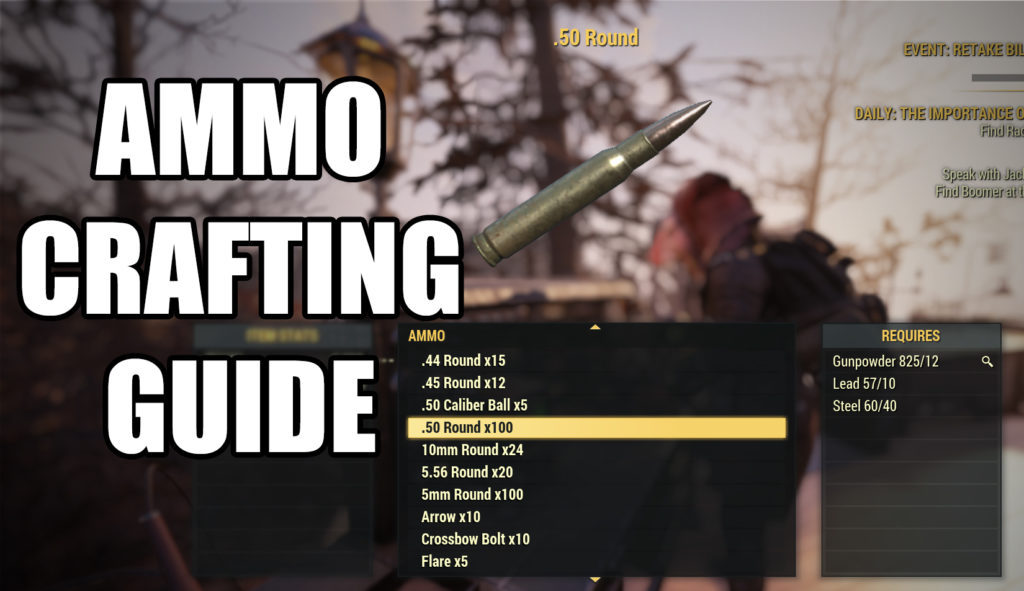 If grinding for Ammo this way either is too difficult OR not really your “Cup o’ Tea”, I’d highly recommend checking out my other ammo crafting guide.

This guide will teach you how to properly craft as much Ammo as possibly in Fallout 76, utilizing ALL the little perks and benefits that give you the maximum amount.

For more about this, click this link: RIGHT HERE