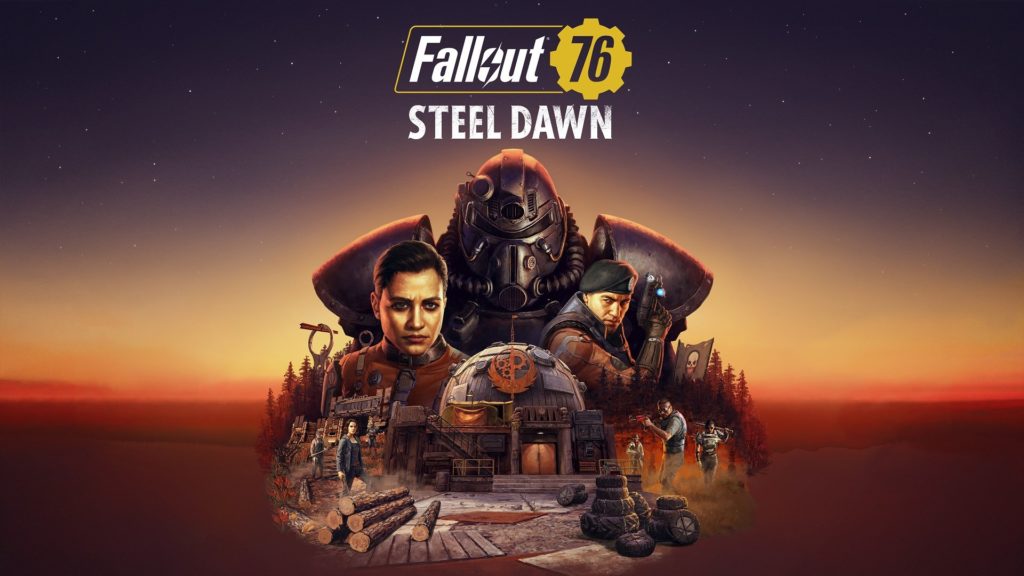 A lot of active Fallout 76 players have been eagerly awaiting the next big update for the game: Steel Dawn. This was the update promised to have the popular Brotherhood of Steel faction returning to Appalachia in order to (more than likely) try to “convince” people to work with them. Which basically means force them to do everything they say without questioning. It’s a cool faction to see introduced into the game, but the big question that I’ve been asked is:

“How is the Expansion?”

Well, it’s got good and bad, things I liked and stuff I didn’t care for. Nothing I passionately disliked, but let’s get into it.

This is definitely the strongest part of the expansion (obviously) as it adds a brand new adventure faction based campaign into the game, the Brotherhood of Steel. We’ve seen the different sides of the BoS in previous titles, sometimes being more understanding, other times mowing down anyone that opposes their rule. The Brotherhood of Steel is a faction that really makes you question many things as you listen to their reasoning of maintaining justice. That remains the same in Fallout 76… but with more “push-over-able” characters, you might say.

Overall, the concept of them arriving back in Appalachia (if you haven’t watched the lore video on this, I highly recommend that you do) to recover their original footing is interesting. They bring a lot of life to the world, answer a LOT of questions that were left unanswered until this point in the games life, and altogether the campaign tells a very engaging story that I found myself cycling through all the dialogue options carefully. To me, the BoS campaign was incredibly solid… but it was very short.

Now, I have to remember that this content IS free after all, so I can’t expect a 10 hour long campaign like Wastelanders was (if you fully read and listened to options, did all the side stuff) due to it being the “Fallout 76 saver,” but I completed the entirety of Steel Dawn’s campaign within about 3 hours, maybe less, and that’s WITH really being engaged with the dialogue. This isn’t to say it’s bad, just that you shouldn’t expect a crazy amount of depth with the campaign, it explains what it wants, builds up to something, and gives you what you need for the moment. It definitely left me wanting more, which isn’t terrible, it just wasn’t as bustling as I figured it might be… not a whole lot to it.

That being said, I enjoyed my short time with the campaign, there was some great dialogue, fun choices to make (which didn’t… REALLY change things in any way like it would in previous titles), and answered a ton of questions that were wide spread in the world.

Fallout 76: Steel Dawn is a fun, action packed, and VERY lore focused adventure. It unwraps many secrets and unanswered questions that were brought to light at the launch of the game, as well as during Wastelanders.

You’ll find yourself speaking mainly to three characters in the Brotherhood of Steel, each of them providing some missions for you to complete, along with weapons and plenty of items with the completion of each. Without spoiling TOO much, they each have very different approaches to how the Brotherhood should be run, two of which severely butt heads later in the campaign due to these differences.

As you start to run maintenance on ATLAS (the main BoS HQ) you will start to learn about why the Brotherhood returned to Appalachia, and the goal of reacquiring a bunch of “captured” brotherhood equipment. On top of that, you will learn about the devastating failure of a mission gone wrong, and why the Brotherhood is trying to distance themselves from the California main… at least for one member.

All in all, the journey is very fun, and it includes a lot of plot twists and choices. For example, you can heavily lean into Brotherhood ideologies to try and impress them, OR you can try to please the separate factions that are now involved with them, such as the blood eagles (which… why would you? They’re easy to bully), Settlers, and Raiders… you might even visit a branch of the Enclave while you’re at it. Each choice you make can determine a different outcome of dialogue and potential reward, but may also hurt relationships if you don’t PROPERLY address a situation. Or you can fulfill your “Being a Jerk” badge and just basically screw everyone over, totally up to you.

Now, to talk a bit more about that, it’s not as intricate as I make it sound. Although there are choices, the outcomes typically are pretty tame. My buddy tried to lie in a situation where I told the truth, in order to see the different outcomes, but the lie didn’t actually work. There’s a number of occasions where that’s the case, so although you do feel like in certain areas you can go a very drastically different route, it’s probably not going to entirely screw up your campaign playthrough, like killing everyone in the BoS in Fallout 4 would. There’s not really a way to “vilify” yourself in the Brotherhood, just make them slightly unhappy.

The campaign isn’t very long at all, you can easily complete it within 3-4 hours, even if you take your dear sweet time, like I did. All in all, the dialogue is good, the conversations are quite engaging and interesting, but the actual campaign itself is pretty normal, nothing too special. Not to say I didn’t like it, but there wasn’t anything too insane about it besides entering the enclave (which is based on the interesting factor of trying to get into communication with BoS California). I feel like it’s a definite lead up, that “Hunger Games Mockingjay: Part I” to the Part II. It’s just a lot of lore and build up without a whole lot really going on besides you basically helping the Brotherhood set up shop in Appalachia and make friends… that they will more than likely use.

For 76 fans, you’ll love it, regardless of length. For Fallout fans in general, those that don’t specifically play 76 a whole lot, you’ll probably enjoy the lore and the fun questing, but it’s not anything to have to play the game over, I’m assuming their future quest (which they’ve already publicly announced) will add a lot to the Brotherhood in Fallout 76.

I personally really enjoyed it, found it really engaging and entertaining. Now just to grind all those dang plans in the Daily ops.