Fort of the Damned Guide | Sea of Thieves 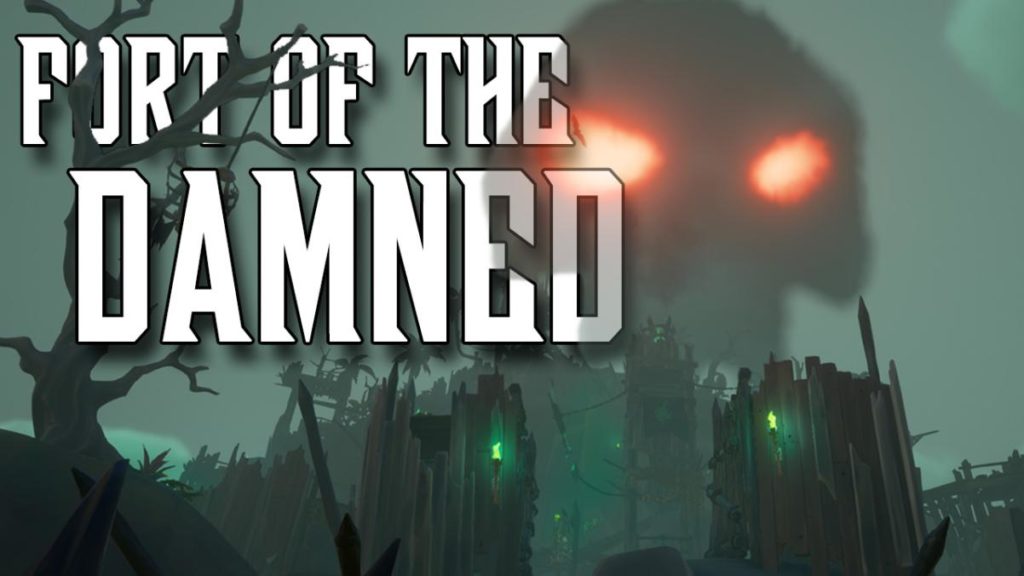 Fort of the Damned is different from the other world events that spawn naturally, such as Flameheart or Ashen Winds. Instead, it is a unique world event in Sea of Thieves that can be started at any time manually. Starting it requires a special sequence of events to be completed by you and your crew. This guide will show you how to activate and successfully complete the Fort of the Damned.

This guide was created by the Kevduit.com team using the amazing advice and images provided to us by our good friend ChimneySwift11. If you enjoyed the guide, consider checking out his live streams on TWITCH

Starting Fort of the Damned

Before arriving at the Fort of the Damned, you and your salty crew must first prove yourselves worthy by collecting all 6 of the Flames of Fate from the Ferry of the Damned using your lantern. Collecting each flame will require you to die in a special way.

Once you’ve obtained each flame, you’ll want to store it safely on one of the lanterns aboard your ship. As you obtain these, it becomes increasingly more important to make sure your ship doesn’t sink or you will lose all the flames you’ve collected. We suggest getting the pink flame first as provoking PvP later may lead to losing the flames you’ve already collected. 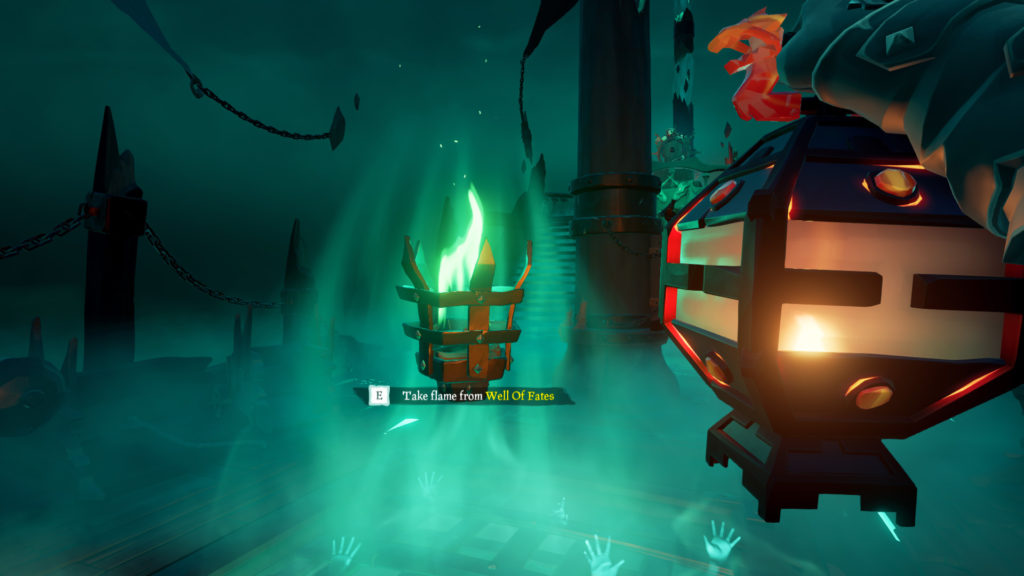 The other thing you’ll need is a Ritual Skull. Here’s where you can find them:

Purchasing the Skull Stash Voyage is definitely the fastest way to get a Ritual Skull, but since you can only purchase one of these per month you may have better luck finding one while you’re out and about collecting your Flames of Fate. 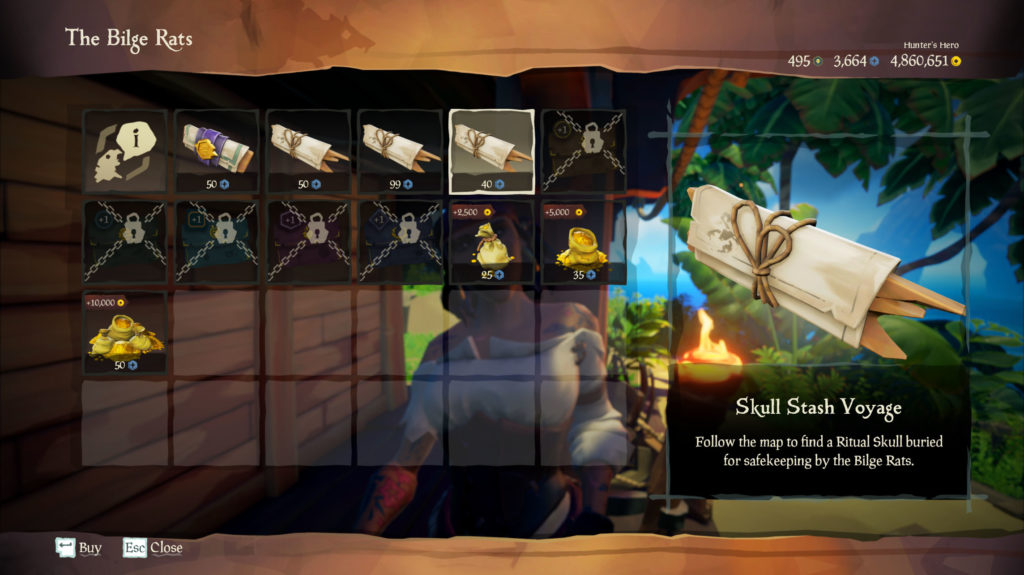 Fort of the Damned Ritual

Once you’ve gathered everything up, head to the Fort of the Damned which is located at L14 on the map. Once there, park your boat at the dock and head into the fort to locate the main ritual room. Use your lantern to apply the proper colored flame to each statue, and once every statue is lit the cage in the center will open revealing a headless skeleton inside. Place the Ritual Skill here and the Fort of the Damned event will begin. 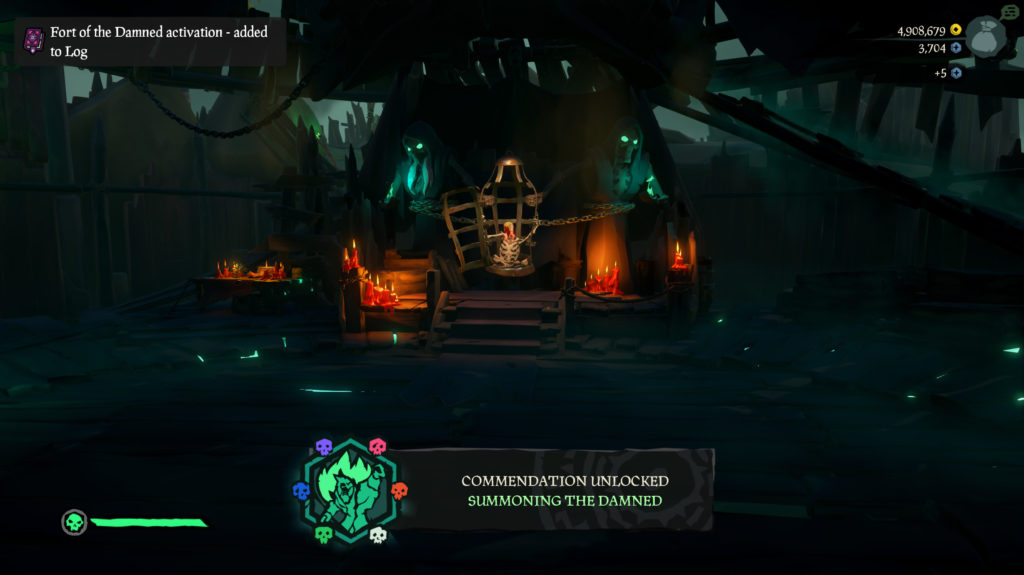 Defeating the Fort of the Damned

Keep in mind that as soon as you complete the ritual, a giant skull icon will appear above the fort sending a literal BAT SIGNAL in the sky to every other crew on the server. So be extra careful and ready for any enemy crew that may try to roll in.

The event will begin with several waves of Shadow of Fate Skeletons spawning until you get to the boss wave where you’ll face off against the Ghost of Graymarrow. Fighting the Shadow of Fate Skeletons can be tricky on their own as they start in a state of invincibility, much like the shadow skeletons you may have encountered already during Order of Souls voyages or regular Skull Fort events. 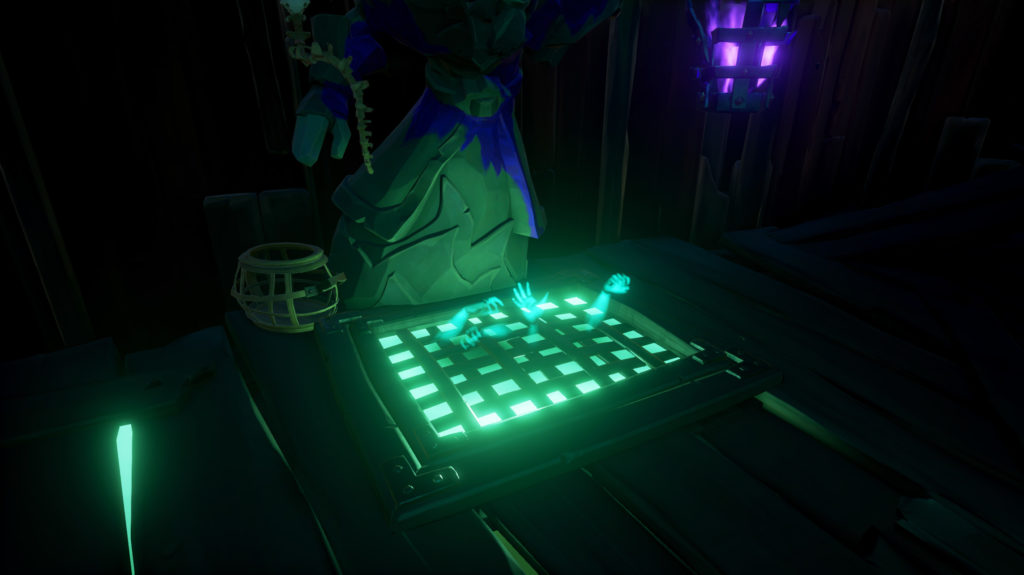 Unlike the shadow skeletons, which will become vulnerable when exposed to any light source, the Shadow of Fate Skeletons will only become vulnerable when you use your lantern to expose them to the colored flame that matches their color. While fighting these skeletons at the fort, take a look at the grates underneath each statue in the ritual room. If any of them have ghostly hands reaching through the gate, then you’ll know you need to grab that color during that round. This is a nice little trick to learn as it’s an easy way to know which color you need so you and your crew can complete that round faster. 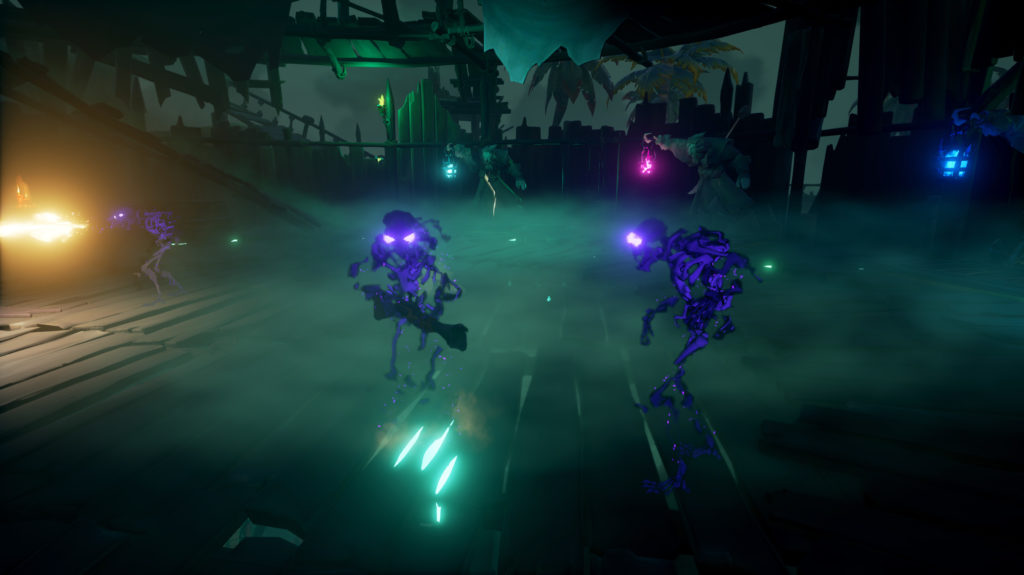 The Shadow of Fate Skeletons can spawn with any of the following weapons:

Each Shadow of Fate Skeleton takes about 8 sword strikes, or 1 point-blank (full damage) blunderbuss shot to kill them.

Fort of the Damned Rounds

There are a total of 13 rounds you must beat in order to complete the Fort of the Damned. The event gets harder as it goes along, so here is a list of what to expect each round:

Fighting the Ghost of Graymarrow

Today’s boss is brought to you in part by the Fate of the Morningstar! This 8th Tall Tale final boss, Graymarrow, was slain and is now reborn as the Ghost of Graymarrow to protect the Fort of the Damned. 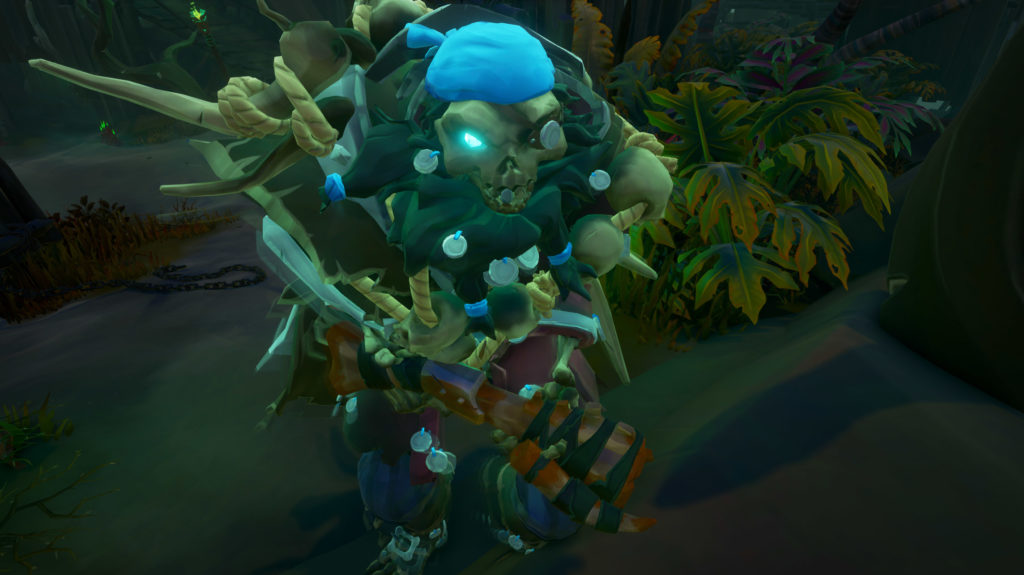 The main attack you will want to avoid is his shockwave attack. This attack is easily recognized as he’ll lift two chests out of the ground, then raise them over his head and slam them together which will create a large shockwave. The shockwave will knock players back as well as deal a lot of damage. He can also switch between using a blunderbuss, pistol, or cutlass depending on how far away you are, so be aware of that as well.

Once defeated, the Ghost of Graymarrow will drop the Fort of the Damned Key which will open the stronghold vault at the fort. The skull cloud over the fort will also go away as soon as you defeat the boss. 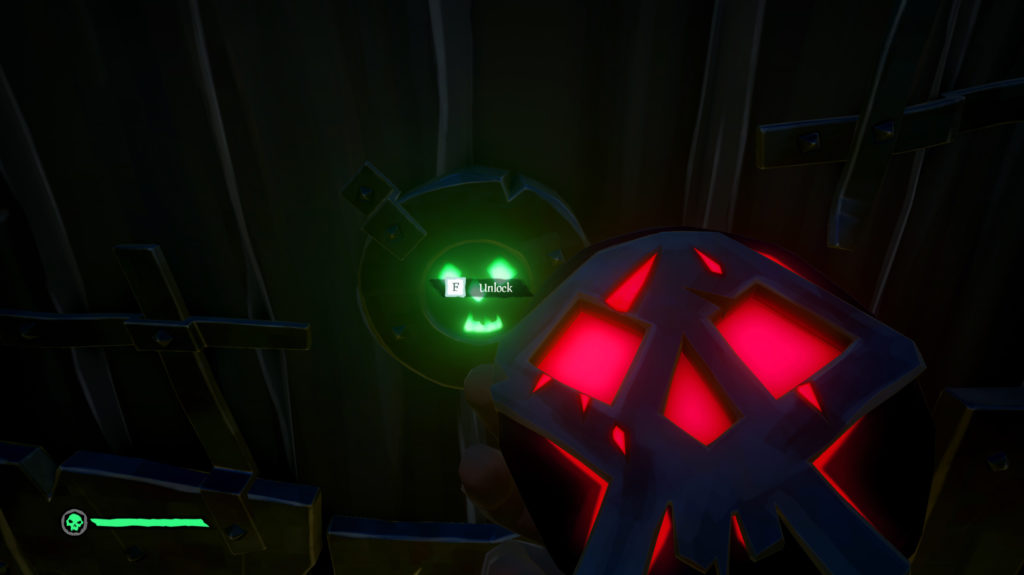 Fort of the Damned Treasure

After opening the vault you will be rewarded with a hefty supply of fruit and a pile of loot. Here’s the list of treasure you will receive: 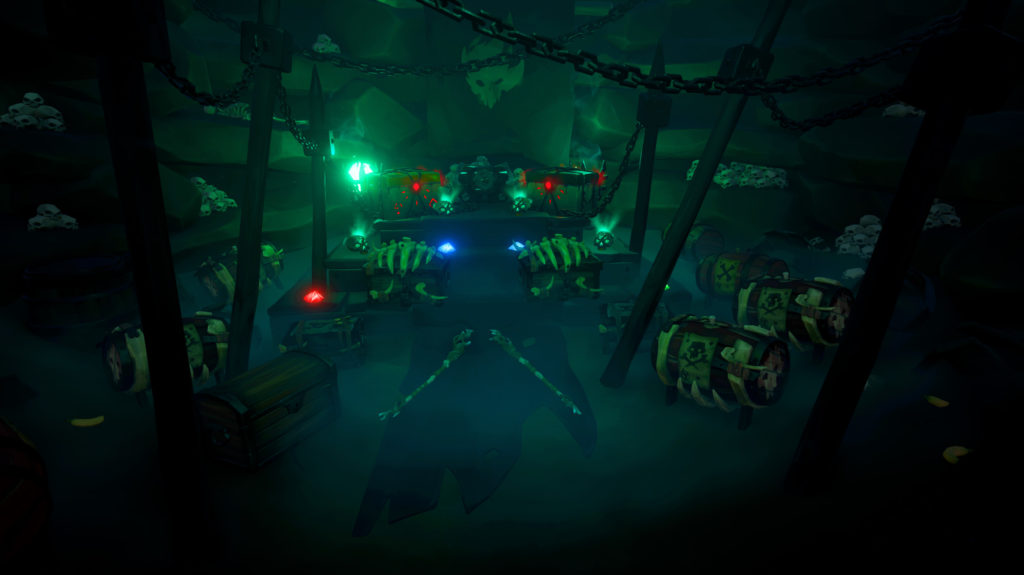 Fort of the Damned Strategies

Here are some general strategies for anyone attempting to complete this, whether you’re solo or in a crew of 4.

If you’re attempting to solo Fort of the Damned…be extra prepared. Bring extra food, cannonballs, wood, etc. It’s best to anticipate a fight with another ship, as usually other players will show up when this fort is active. It’s not a bad idea to raise your Alliance flag as well to potentially indicate to other players that you’re friendly and could use some help. The best advice I can give when trying to solo Fort of the Damned is to complete a wave of skeletons, then run to the VERY top of the fort. There’s a ladder way up there that can take you to the very top. Once up there, the skeletons can’t reach you and you’ll have an unobstructed 360 degree view of everything around you. Check your horizon in between EVERY round to make sure you know where any enemy ships are. If you see one getting close, it may be time to get on your boat to defend, negotiate, alliance up, or run (depending on the situation).

If you’re in a crew of two, I’d recommend the same strategy as solo. Both players fight the waves of skeletons and then always check your horizon in between rounds. If you’d like to be extra cautious, you can always have 1 player fighting the fort and the other in the crow’s nest of your ship keeping an eye out for approaching boats or rowboats with enemy players. During waves 5-12, each player should carry a different Flame of Fate color to use against the Shadow of Fate Skeletons.

The best strategy for trio teams is to have 2 players fighting the fort while 1 player stays on the ship keeping an eye out for enemy boats. During waves 5-12, each player should carry a different Flame of Fate color to use against the Shadow of Fate Skeletons.

The best strategy for quad teams is to have 3 players fighting the fort while 1 player stays on the ship keeping an eye out for enemy boats. During waves 5-12, each player should carry a different Flame of Fate color to use against the Shadow of Fate Skeletons. With a full crew you can even have 1-2 players lure the skeletons to the docks and the other 2 blow them up with cannonballs while they are vulnerable.

Tips for Completing Fort of the Damned

Commendations for Fort of the Damned

Here is a list of the Commendations you can earn as a bonus to completing the Fort of the Damned. These do not give you anything other than Dubloons or Gold for completing them.