Lame Name for a Fantastic Game

First it was “Gods and Monsters” which then (for legal reasons) changed to “Immortals: Fenyx Rising. Both of these names are… pretty lame if I’m being totally honest. Thing is, the game is completely the opposite. Fenyx Rising is hands down one of Ubisoft’s best games in YEARS. 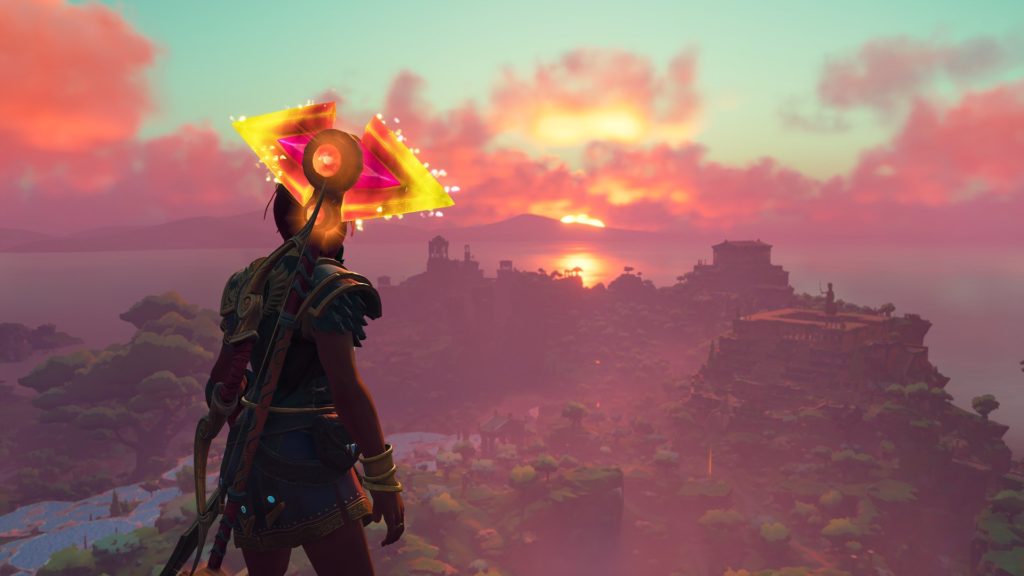 Not your average Ubisoft game

You don’t have to play more than 2 Ubisoft games in the past 8 or so years to realize how similar their games play and feel. The mechanics, the graphics, the gameplay, it all seems to just flow from one game to the next, and you could especially feel that in almost all games since “The Division.” Although I loved Watch_Dogs, Legion absolutely tanked, Odyssey wasn’t even ABOUT Assassin’s Creed all that much, Far Cry 5 was great, but very generic, and The Division, Division 2, Ghost Recon Wildlands/Breakpoint, were basically all the same game mechanically.

How many Legend of Zelda games are there? Super Mario? Elder Scrolls? Each of the games SO unique and different, even though they ALWAYS have that name as a preface to whatever number it is in the series (Majora’s Mask was great, by the way, regardless of it’s similarities). Ubisoft hasn’t really done anything GROUNDBREAKING in years. They’ve become known for very average games by the community, even if a game of theirs turns out to be great (looking at you Valhalla).

SO, why am I saying all this? Because you need to know how drastically different Immortals: Fenyx Rising feels from any other Ubisoft game. I know folks are gonna say “CARTOON ASSASSINS CREED” or “BOTW AC CLONE,” and although there’s definitely elements, they’ve really created something fun here. It’s a mixture of so many good pieces from so many games, combined into a VERY well done open world adventure.

The most Charismatic campaign

A lot of open world games typically fall prey to putting a ton of time into exploration and questing… that they forget entirely that the campaign should probably be at LEAST 1% engaging. Immortals: Fenyx Rising has done something I haven’t seen very often at all, and if I have it hasn’t been within a timeframe that I remember it. A campaign that is completely narrated by two absolutely hilarious characters who oversee (and judge) everything you’re doing. At first I was a little worried about pacing and proper story telling in this fashion, but the more I engaged in the events of the story, the more I came to enjoy every BIT of narrative, which includes a ton of Monty Python styled humor. A lot of times games add “heh” humor, the kind of jokes that make you exhale slightly more aggressively than usual. Fenyx Rising, however, makes it a POINT to teach you a TON about Greek Mythology as you play through specific areas and meet popular characters, all while threading fantastic humor into the conversation.

Now, this ISN’T to say that your character isn’t engaging in the world, it’s similar to, say, Mystery Science Theatre 3000. You have the show, which is you actively playing the game, meeting Greek gods (which is all voice acted, of course), while you have two narrators commenting on things that you do, explaining lore of areas you explore, making fun of you when you do something ridiculous. It’s super engaging and creates for a world that ALWAYS feels lively, because you do have moments of no narration and commentary, but when the narration pipes up, it’s always enjoyable and never feels misplaced. 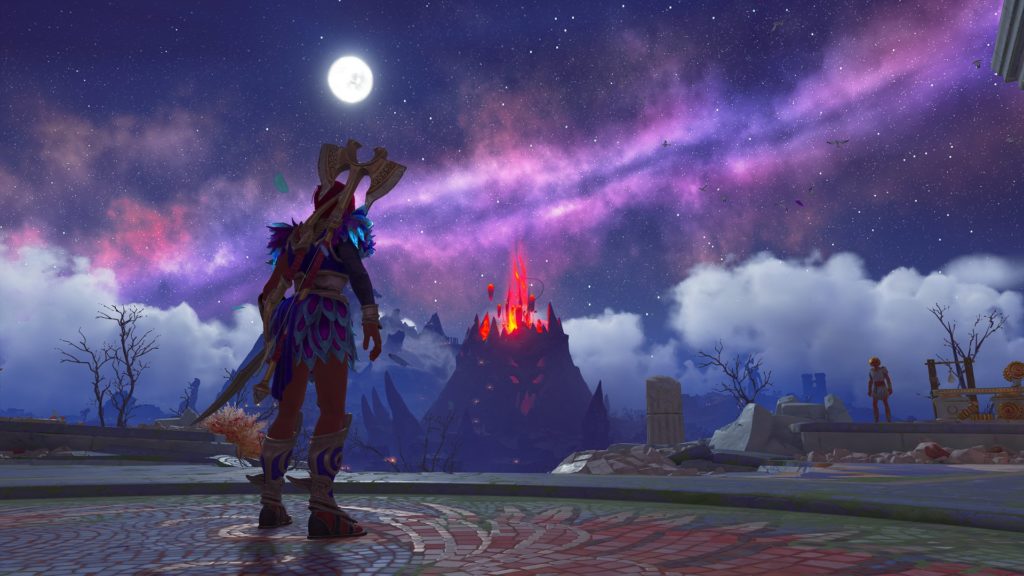 So many games these days are making puzzles dumb easy and lame. Do any of you remember the Legend of Zelda “Hate-your-life-for-3-hours-cause-you-couldn’t-figure-out-the-simplest-yet-smartest-puzzle” puzzles? I miss those. I miss when games challenged a player to REALLY think through what they’re doing, using every tiny mechanic possible, to arrive at a satisfying solution… which usually also makes you feel dumb because it ends up being super easy.

Immortals: Fenyx Rising returns players to that same puzzle solving anger… and fun. The world is LITTERED with puzzles everywhere, some that are obvious, some very well hidden, and then a bunch in totally separate realms that you jump into (similar to Breath of the Wild shrines). The first couple puzzles can be easy, getting players used to mechanics and whatnot, but as you explore more and more, some of these puzzles will absolutely break your brain, mechanically torture you, and then make you feel stupid for taking 15 minutes to solve something that should take 1.

On top of that, you have the REST of the open world and the wonders it brings! The combat is hands down some of the most satisfying and fun action you can get. In the beginning you have some basic light attack, heavy attack, parry, dodge stuff going on. The combat plays a lot like BOTW, Assassin’s Creed: Valhalla, and Dark Souls all combined. You’re constantly trying to get in quick light attacks, but when the opportunity presents itself to heavy attack, that will deal bigger damage and “stun” damage to an enemy. Each enemy has a stamina bar, and so like Dark Souls, once you deal enough “stun” damage, they will break guard for a few moments for you to deal as much damage as you can. What’s nice about Fenyx Rising is that even the most basic of enemies can be the one to finish you off in a fight, making every battle engaging. You want to parry and dodge those flashing red attacks, you need to understand boss mechanics to beat them, each and every enemy encounter has a different approach. BUT, ultimately, it’s just way too much fun slamming this MASSIVE hammer against an enemy and watching them fly 40 feet in the air and explode. Also, watch out for the chickens.

The world of Immortals Fenyx Rising is also MASSIVE. It doesn’t feel nearly as huge as, say, Breath of the Wild, but it is still an absolute monster of a map to cross over. The amount of locations to explore, secrets to find, places and puzzles to discover, they made excellent use of the space they created, with each region (7 in total) being very different from the others. The game is beautiful, and really gives off that Breath of the Wild charm with breathtaking sunsets, various weather conditions, and a hankering to stop every couple of minutes to take a screenshot. The more I explore, the more the game dragged me in, especially with the hilarious commentary to go right on with it.

The one thing I wanted to also mention was the performance. I find that lots of games coming out these days CAN NOT seem to deliver in the performance department, especially when a game comes to the switch. Well, you’ll be happy to know that the game performs BEYOND what I expected on both the Xbox Series X AND the Switch. I didn’t have my hopes up whatsoever for it to run even okay on the Switch, but it managed to look and play great, even in handheld mode. Just a nice touch for a game launching on so many platforms all at once. 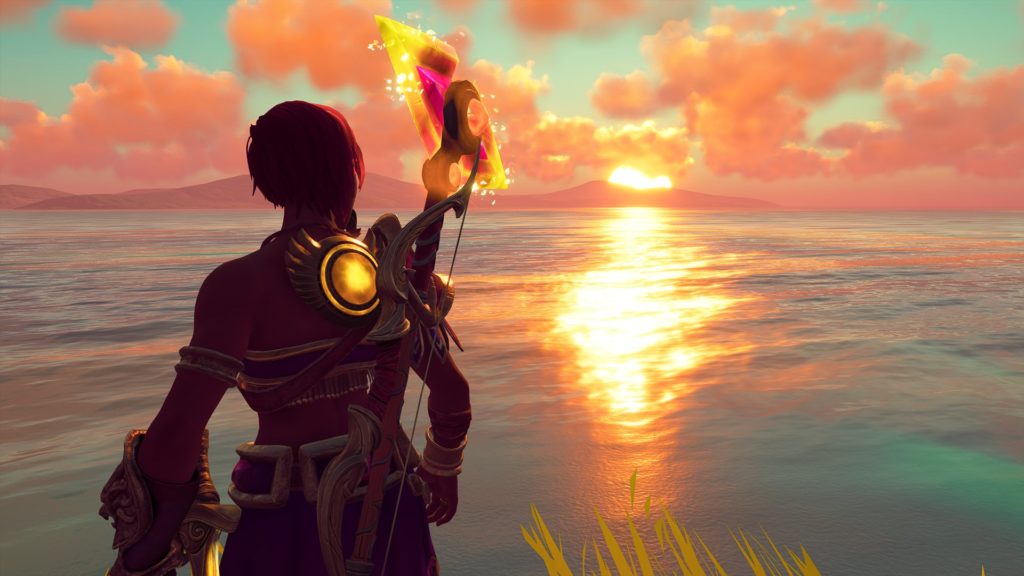 I’ll just come out and say that I really REALLY enjoyed this game. There are definitely some parts that felt a little slow, maybe some mechanics (THE FLYING) that could be a little janky, but for the most part it’s just an absolute blast to play. We don’t get many games in between, say, Zelda and Assassin’s Creed, games that get a good ol’ TEEN rating, so they can definitely slip some hilarious adult jokes in, yet not go to the route with buckets of blood pouring across the land. This game is action-packed, comedy injected, rage enducing puzzle filled fun, and I highly recommend it to, well, basically anyone who loves open world games like that. A very refreshing change for Ubisoft, giving off a whole new feeling and vibe, exploring lots of interesting new routes of campaign narration, mixed with great combat and an engaging story.

Video of me messing around in the game