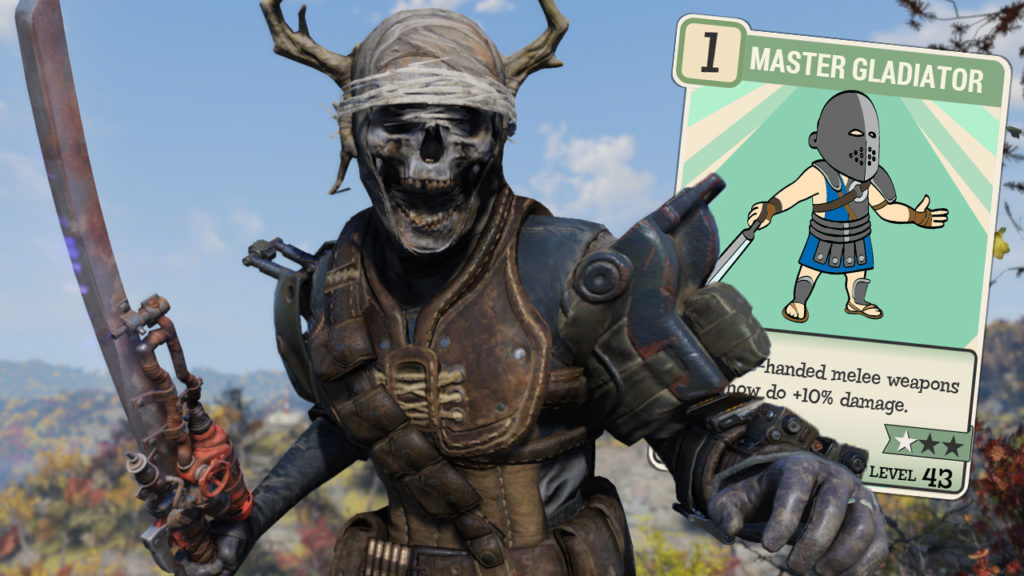 One Handed melee builds are incredibly popular in Fallout 76 due to their pretty easy to build setups, high damage numbers, and insane buffs you can abuse to make them quite strong. There are also a variety of One Handed weapons to choose from, with heaps of different mods, so they’re fun to just collect and mess around with.

When it comes down to finding a good One Handed melee weapon, there’s always a couple weapons that are better than others, like any kind of bladed weapon will typically have a higher damage number than, say, a rolling pin.

Whatever One handed Melee weapon you roll, these are the legendary’s you want to keep your eyes out for!

With One Handed Melee Builds, you can decide for yourself if you’d prefer regular armor or power armor. Both are beneficial in their own ways, regular armor being more mobile while power armor providing far higher resistances. Below I’ll show you what my personal favorite armor to wear is, it’s end-game stuff though so you might need to wear some of the basic stuff if you don’t have yourself the funds to purchase the expensive ones.

Regular armor is totally up to the user on which they wear, but when we’re talking about Melee builds… well, actually any build pretty much, you’re going to want to go with Secret Service armor, which is purchased with Gold Bullion after completing the Wastelander’s main campaign. It provides an insane amount of armor, better than anything else, and the ONLY problem is that you need to buy it at the extremely expensive price and then HOPE you roll some good perks on it.

By the way, quick note, if you’re wanting to use a bloodied build with Melee (which is where Nerd Rage comes in handy, and damage goes crazy) you’ll want to definitely stick to either Unyielding or Bolstering if you’re dying a lot.

Just like regular Armor, Power Armor also has it’s “better” versions that are pretty much just superior to the rest. If you’re rocking Power Armor with a Melee build, you’ll want to get T-65. The T-65 Power Armor provides the absolute highest amount of damage resistances as possible, but also costs a fortune in Gold Bullion to purchase all the plans, so once again, use what you can. T-60, X-01, and Ultracite Power Armors are quite easy to come across just by completing the Enclave and Brotherhood questlines. 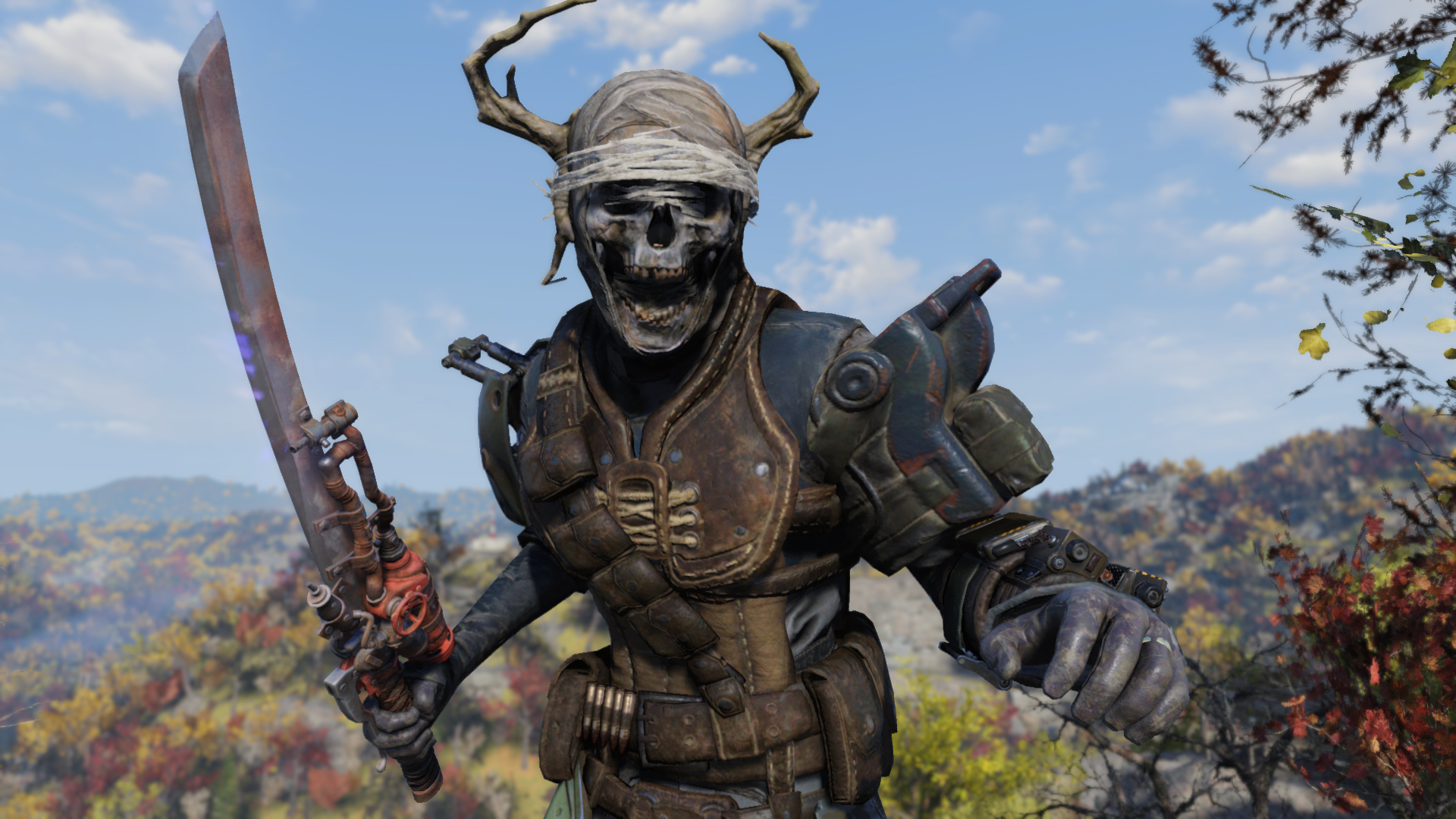 Fallout has always included an insane amount of variety in One Handed Melee weapons, and Fallout 76 has proved to be no different. This build is for those players who want to get up close to their enemies, slicing and dicing through everything in their path. Of course, you need a good build to do that, and I’ve got just the one.

Using One Handed Melee Weapons opens up a WORLD of variety, but you need to remember that some weapons are (obviously) far greater than others. For example, if you find both a Legendary Rolling pin AND a Legendary Shiskebab Sword, you know which one you gotta get rid of.

With that being said, even though some weapons are clearly inferior to others, it can still be fun to modify the more unusual one handed melee weapons to insane heights, just to see what they can do!

Here are some of the better Legendary One Handed Melee Weapons I’d recommend keeping an eye out for:

Anti-Armor: Ignores 50% of an Enemies armor

Junkie’s: Deals greater damage the more negative effects you have

When it comes to using a One Handed Melee weapons build in Fallout 76, it’s important to maintain a good amount of resistance OR health, depending on if you’re going a bloodied or Berserker’s route. You can NEVER go wrong with using Unyielding Armor, which basically boosts all of your S.P.C.I.A.L. stats (that’s right, it excludes Endurance) by +3, or use Bolstering Armor, which helps you maintain a VERY high amount of resistance when at lower health, almost mandatory for Bloodied builds. If you’re not wanting to risk a low health build (which is DOUBLE risky when using a Melee build) you can try to focus on using legendary melee weapons that don’t rely on low health, and then look more towards Vanguard’s Armor.

On an OP One Handed Melee Build, using certain buffs to compliment your overall damage, and your movement speed is very important.

Adrenal Reaction: Increased Damage Output at low health. This is GREAT for players with Bloodied Melee weapons that already boost low health damage. Without Class Freak, this comes at a cost of 50 Health.

Marsupial: +20 Carry Weight, and you can jump much higher. The carry weight is a HUGE bonus in this game, and the fact that you literally get to hop around swinging a one handed melee weapon is too good to pass up. Without Class Freak, this comes at the cost of 4 Intelligence

Speed Demon: +20% run and sprint speed, +30% faster reload speed. Now, the reload speed here is kind of a loss, but as a melee build, it seems like you’re never close enough to your enemy’s, so speed demon gives you that edge. Without Class Freak, this comes at a cost of 50% more hunger and thirst while moving.

Twisted Muscles: Melee damage +25%, better chance to cripple limbs. Obviously, this is one of the more important perks to utilize with a Melee Build.

Carnivore: No disease from Meat and 2x bonus to Food from eating meat products. This comes at the cost of of fruits and vegetables not satisfying your hunger whatsoever. But who cares, you’ll be eating a TON of Glowing Meat Steak to boost your melee damage.

Glowing Meat Steak: Specifically for Melee builds, combine this with the Carnivore mutation and you get a big damage boost

Psychobuff: +3 Strength, +3 Endurance, & +65 Max Health at the cost of -3% Food, -3%. This is just MORE power to you and your Melee weapons build, and is highly encouraged to hop up on these before MASS killing sprees. These are easier to come by, and definitely boost your build.

Strange this isn’t under the drugs section, but I suppose this is a totally different system. Alcohol is very important to strength builds, as it directly buffs that attribute specifically. Here are the best drinks to look out for. These two beverages are useful for keeping up your strength (in case of carry weigh purposes) and endurance, to maintain a higher health level.

In Fallout 76, Melee has always been a very viable option for those who love high risk but big damage situations. One Handed Melee Builds can get players through some of the toughest content in the game, especially players who know how to be stealthy, yet break out of stealth when need be. Just remember, the faster your swing speed, the greater your damage.