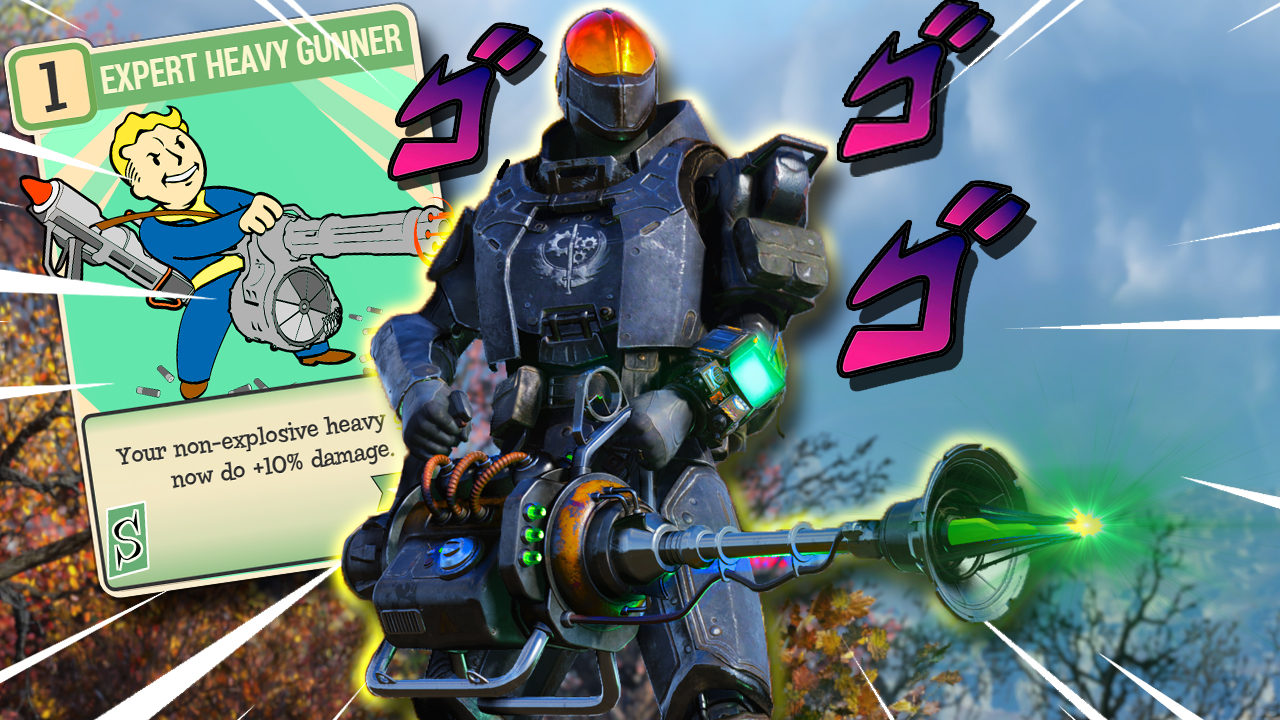 Wastelanders introduced one of my favorite new guns to Fallout 76, The Plasma Caster. This Heavy Gun can deal absolutely insane damage, with incredibly high chances to hitting your enemies in V.A.T.S.

Today, we build one of the strongest Plasma Caster setups you can use, able to deal easy 6k+ damage to your enemy’s when fully buffed up, capable of one shotting nearly any enemy.

With the Plasma Caster, you’re going to want to focus on getting incredibly high damage dealing Legendary perks, as Heavy Guns themselves aren’t THAT great. In this case, I have a few recommendations of Plasma Casters that would serve to be be benficial.

REMEMBER: The Plasma Caster can ONLY be obtained by Reggs, the Gold Bullion dealer at Vault 79. You need to buy the plan, and then Legendary Modules, as you can now craft your own legendary’s.

ON top of this, make sure you try to spare a little Gold Bullion to purchase both the True Long Barrel and the Prime Capacitor, as those will give an insane boost to your weapons performance. The Prime Capacitor is a must, the damage is too good to refuse, and the ammo can be crafted in very large amounts, just farm a couple Scorchbeast Queens and nuke zones for all the materials, and you’ll be set and ready to go!

Anti-Armor: Ignores 50% of an Enemies armor Junkie’s: Deals greater damage the more negative effects you have

Junkie’s: More damage the more your addictions are

ANY Bonus to V.A.T.S in general

This build benefits greatly from Power Armor, as you can take advantage of Stabilized, which is a great perk for Heavy Gun users. In this case, the TYPE of Power Armor you use is entirely up to you, but you probably want to focus on +Perception and +Strength for the most part. Sneak is also important, so focus on that as it’s NOT easy with Power Armor.

When it comes to sporting regular Armor with your Plasma Caster build, I would highly recommend using Unyielding Armor, which basically boosts all of your S.P.C.I.A.L. stats (that’s right, it excludes Endurance) by +3, or use Bolstering Armor, which helps you maintain a VERY high amount of resistance when at lower health, almost mandatory for Bloodied builds. Try to find armor pieces that help lessen your carry weight load as well, can be handy while carrying all those arrows.

My HIGHEST Recommended armor (Without Power Armor) is hands down the Chinese Stealth Suit. Once piece of armor BOOM, you’ve got everything you need: Radiation resistance, high damage resistance, and the ability to go straight to stealth simply by crouching.

On a Plasma Caster Build, using certain buffs to compliment  your overall damage, and your movement speed is very important.

Adrenal Reaction: Increased Damage Output at low health. Without Class Freak, this comes at a cost of 50 Health.

Marsupial: +20 Carry Weight, and you can jump much higher. The carry weight is a HUGE bonus in this game. Without Class Freak, this comes at the cost of 4 Intelligence

Speed Demon: +20% run and sprint speed, +30% faster reload speed. The reload speed with the Plasma Caster build is a MUST HAVE, as Heavy Guns are quite slow on the reloading ends of things. Also a good reason to try and roll a Legendary perk for reload speed and use Lock & Load. Without Class Freak, this comes at a cost of 50% more hunger and thirst while moving.

Eagle Eyes: Here you find yourself at a BIT of a dilemma, as your strength is now completely wiped off the face of the planet BUT your critical damage is boosted greatly. Even though you won’t be too strong anymore, you’ll be dealing better crit damage than ever before.

Strange this isn’t under the drugs section, but I suppose this is a totally different system. Alcohol is very important to strength builds, as it directly buffs that attribute specifically. Here are the best drinks to look out for. These two beverages are useful for keeping up your strength (in case of carry weight purposes) and endurance, to maintain a higher health level.

For a Plasma Caster Build in Fallout 76, there are MANY different playstyles (which is weird to say, considering this is a HEAVY gunners build). Personally, I love using the thing from stealth. The ammo is incredibly cheap to cost, so you can stock up on a couple thousand, and if you one shot everything, well, you won’t need to worry about re-stocking often. On top of that, make SURE that you grab the True Long Barrel and Prime Capacitor, like I mentioned above, as those give you a pretty insane boost to Gun stats.

You CAN play this build more aggressively, as you will be in Power Armor for the most part, just make sure you buff up well so you take full advantage of what this build can pull off.