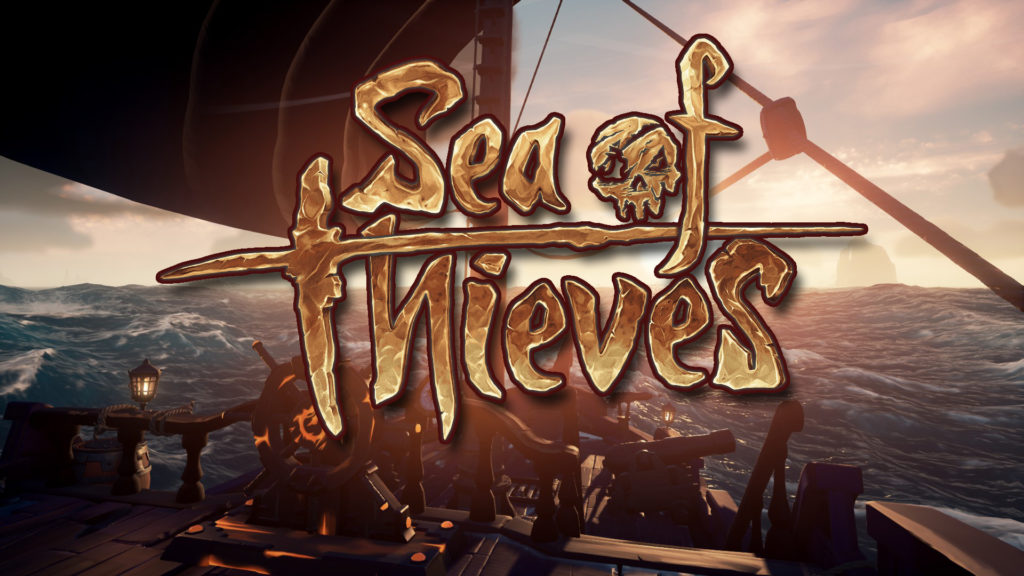 When I first started playing Sea of Thieves, I honestly hated it. There were a LOT of reasons why, but the main reasons were that my random crew was brainless, we were constantly attacked and spawn killed, and finally… there was pretty much nothing to do. I was insanely disappointed (since the CONCEPT was so fantastic) that I put the game down a week after it launched and I never thought about it again… until my buddy Philip told me I needed to try it again.

and man I’m happy I did.

The Highest Seas of Risk and Reward 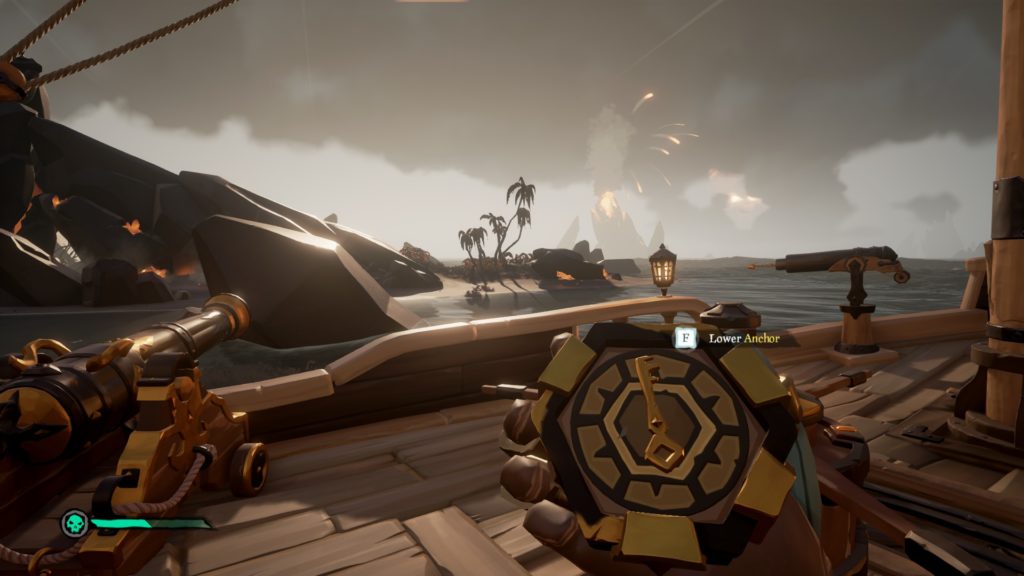 If you’re not a fan of risk in games, in possibly being in CONSTANT peril as you risk every drop of gold you’ve accumulated in the form of sellable loot for that ONE EXTRA rare chest… then Sea of Thieves might aggravate you to no end. But for me, it makes me want to play it more and more. I came from games like ESO, Fallout 76, and Destiny 2, games that make a very fine line between what’s PvP and what’s not. They separate the two KNOWING that if they were mixed together, if no place was safe, the game just wouldn’t do as well because it sets that competitive bar. The thing about Sea of Thieves, is that you go in knowing THAT is the experience, and you either enjoy it or you don’t.

The cool thing about SoT is that it’s not JUST about PvP, this isn’t a battle royale like Fortnite or Warzone, I’d think of it more like a simplistic Pirates version of Tarkov… in a way… maybe with less complexity with combat. You get your ship, your crew (or solo), and your resources together, and you set sail. There’s literally NO advantage one player has over the other when they first spawn in, everyone spawns with the exact same possible loadout, and from there you decide how much you want to prepare for your voyage by looting all the nearby barrels and crates for cannons, food, and wooden planks to repair your damaged ship.

Once you hit open waters, you’ve entered the belly of the beast. Enemy player ships, enemy NPC ships, giant Kraken or Megalodons, insane storms, the sea is lively and potentially dangerous from the minute you leave the comfort of an outpost. And from there, the risk for reward becomes real. Every treasure chest, skeleton skull, or merchant delivery item becomes a hefty target for enemy players. Not only that, the longer you sail the more likely you are to bump into skeleton ships that will aggressively attempt to sink you as you either try to fight or run. You might get lucky and have a smooth sailing trip… but where’s the fun in that. 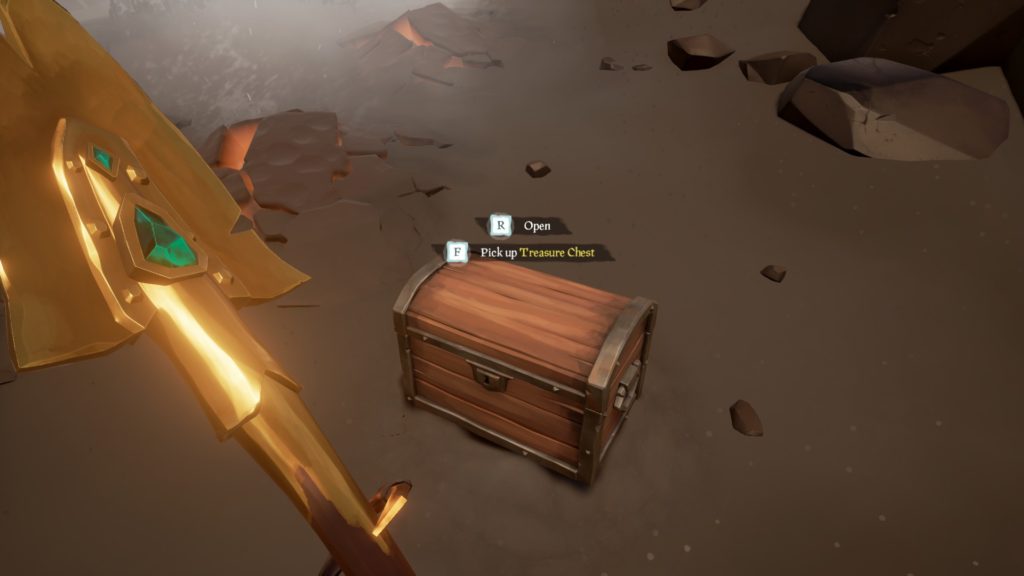 For me, Sea of Thieves is one of the best games to just hop in, play for a couple hours, and then jump out without the pressure of grinding or farming. It’s a game where there’s really no consequence to dying other than possibly losing your hour of looting, but that’s just the name of the game. This isn’t an MMO or RPG, I’m not drawn back to the game because of the need to keep up with with other players or because I need to grind a specific set, I’m drawn to the game because it’s so much dumb basic fun.

The game has a learning curve to it for sure, but once you figure it out, you just take off without a care, hope to slap a buncha loot on your ship, and PRAY you make it back to an outpost island alive to sell it all. There’s not a single “set piece” or “upgraded gun” that you need to grind for. When games say fashion is end game, it’s usually 20% true… but in Sea of Thieves is LITERALLY the end game. I’m not even kidding, you legitimately level up your specific trading guilds to buy better quests that make you more gold (and sometimes dabloons) and as you level up and advance in different fields, you can buy fancier ship parts and G R A N D looking attire. From your head to your toes (or maybe I should say peg leg) can be customized so no two pirates look alike, and your weaponry is just a statement of your progression. Fashion is both the beginning AND end game content, and somehow it’s so dang enticing it never gets old.

The game does have a good bit of questing options, which is nice considering when the game launched it just felt so empty, but it can still be fairly bland. The “grind” for Sea of Thieves (which is just the faction levelling) comes into play when you run 100 merchant item deliveries in a day, and it’s just the same thing over and over again. You CAN shake things up by hopping from one faction quest to another, but at the end of the day, each faction questing type can start to feel pretty repetitive. Either you’re digging up that red X on your map or sailing in search of a vault. You’re bringing items from one island to another or your grabbing a bunch of requested resources around the sea to deliver. You’re killing skeleton captains to sell their heads or sinking a ghost fleet to… well, get their skulls too. There’s just a bit of repetition that makes the game lose interest if you’re just playing to acquire loot without stealing from other players.

HOWEVER, the nice thing about Sea of Thieves is that they’re continuously adding new types of quests that DON’T require you slapping a purchased faction quest to make some gold. They’ve got a bunch of forts to fight heaps of tough enemies to get an insane amount of treasure, or tall tales that take you on more “adventure type” quests that tell a story and have lots of hidden stuff to collect all the while. Where Sea of Thieves lacks (slightly) in the main questing department, it makes up for the amount of stuff you can do OUTSIDE of it. 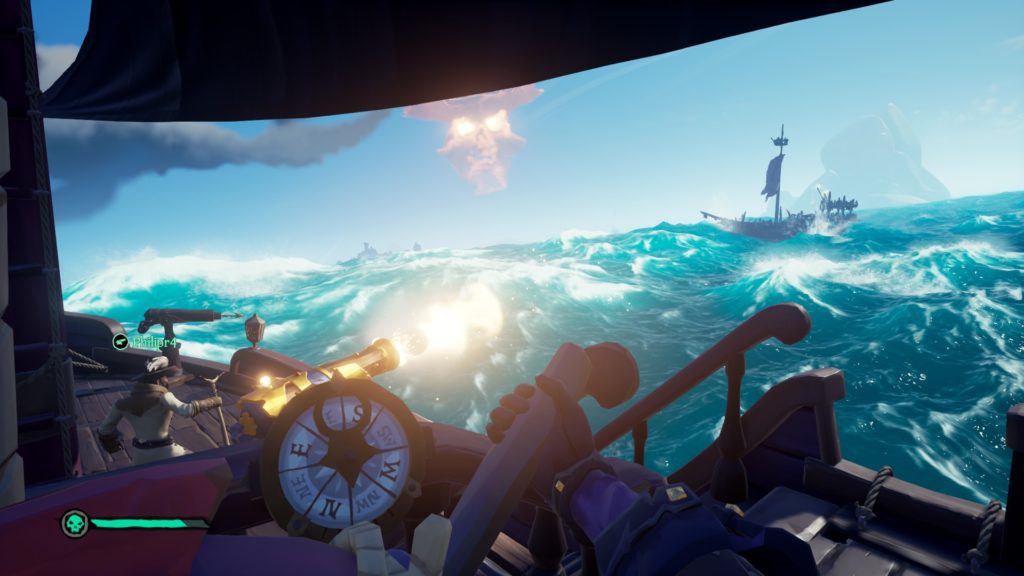 Sea of Thieves’ has some pretty basic combat. You’ve got your sniper, shotgun, pistol, or sword you can carry around, alongside two throwable bombs, an acquirable trident (from killing sirens) and then your ship cannons. Nobody really has damage better or above other players other than their skill to hit accurate shots. When you engage in a fight, you both can easily acquire items to be at the exact same advantage.

But the combat is a bit clunky for sure. The hitboxes for guns seems really off, the sword fighting is so frantic and scattered is feels like slicing the air until one person drops dead, it’s just VERY basic. Now the NAVAL combat, that’s where it’s at. It’s incredibly well tuned, heaps of cannon variations (even magical cannons that can cripple an enemy ship in OTHER ways than just pop holes in it), and genuinely some of the most fun you’ll have in the game. I’ve lost literal hundreds of THOUSANDS of gold due to fighting enemy players (it’s easier to lose that much than you might think) and I’m not even upset just because it was such an insane fight. Sometimes you’ll get the odd bugs or glitches that interfere and ruin a good fight (or you get hackers that just absolutely demolish you in a second), but for the most part I can’t recall too many ship fights where it was a broken experience.

On top of fighting players and skeletons, the game also has some massive events that go on all around the map that anybody can travel to and partake in. The Fort of the Damned is a massive and long-drawn fight for a stock pile of some of the best loot haul in the game. Giant fire tornado’s mark an intense and difficult boss fight resulting in a HUGE explosion of good loot. Random Kraken or Meg encounters that’ll make you fight your way out. If you want a game with combat, SoT is pretty much combat all the time. 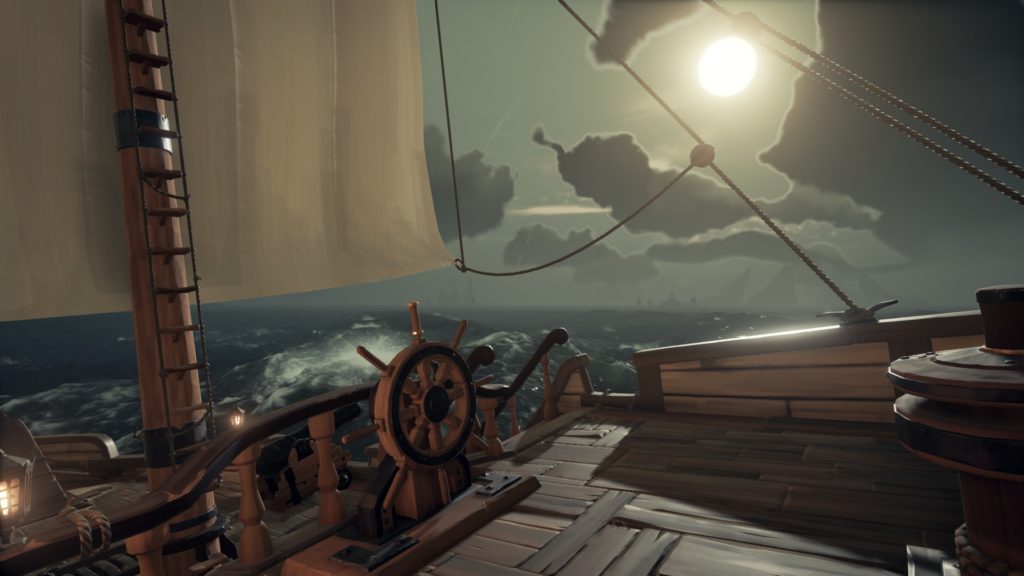 I think the last thing I want to note is the experience with and without buddies. I’ve played a couple times by joining a random crew, and let me tell you, that should be a last ditch effort to play when none of your other friends are online. In fact, I just solo the game if I can’t play with a friend. I’ve had so many atrocious experiences, and maybe it’s just bad luck, but THIS is where you’ll start to dislike the game. Sitting on a MASSIVE galleon until the mic-less players finally agree on a quest (after 30 minutes of arguing what faction you’ll fly under) and then you sail for 20 minutes, hoping that your crew will participate in the quest. In my experience, one of two things happened:

Either way, you might get luckier than I did, and I HOPE you do, but at the end of the day this game is far far greater experienced with some good buddies who just want to chill out for a bit, good communication, and maybe a cold cider. Most of the time me and my buddies play we’re just goofing off half the time, BUT if you do want to play seriously, you’ll need a crew that does understand what to do when your ship is being run aground and there’s an enemy player ship rattling yours with cannons. It’s tricky to expect that sort of chemistry with a random group, you might get it, you might not.

Honestly, Sea of Thieves has moved from being a game I just couldn’t have cared less about to a game I’m now hopping into constantly with friends. It has one of the most lively open ocean worlds I’ve experienced since games like Assassin’s Creed: Black Flag and The Legend of Zelda: Wind Waker, and has some of the most interesting gameplay. Not many games without a gear set loot grind to sink tens of hours into have enticed me as much as this game has, and it’s so good. To not feel pressured to constantly have to login to keep up, combat that is so simple it’s easy to pick up again after a while of not playing, and the quick “hop-in-and-immediately-play” factor makes it good time without having to prep for an hour before playing.

All in all, that’s what makes Sea of Thieves great. It’s not the most complicated. It doesn’t require you to time-sink. It’s just great fun.