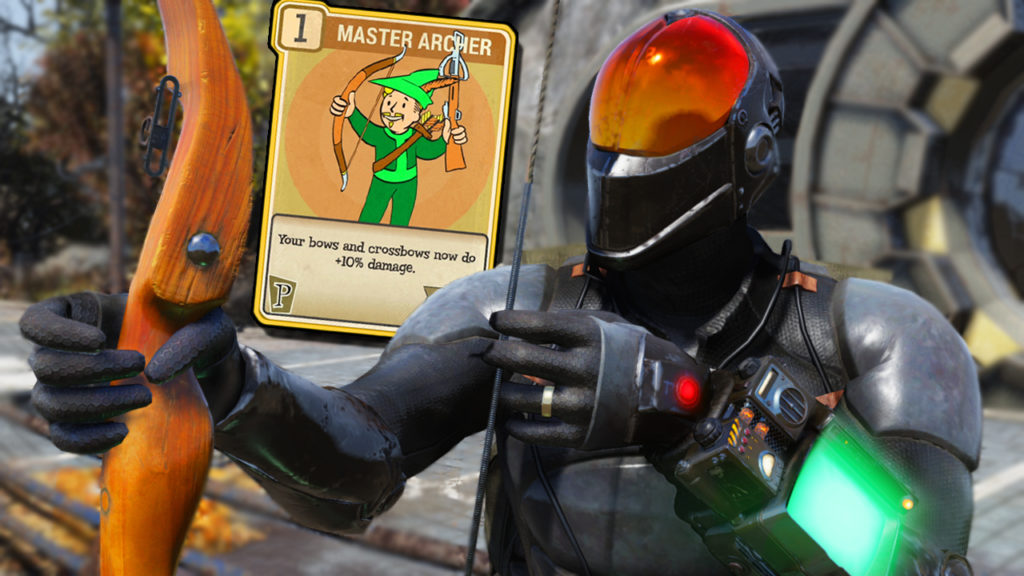 This build is PRETTY close to my usual Archer setup (same SPECIAL so you can easily swap) but this one is a tad bit more focused on utilizing FULL stealth mechanics, alongside VATS, rather than being a bit more “open” with your setup.

It’s not that much different, but I thought I’d share it for those of you who LONG for that extra stealth damage.

For this build, you’ll want the best bow you can possibly find to deal maximum damage. We’re definitely focusing on either Bloodied or Instigating for this one, as that’ll give you possibly the highest damage you can get when hitting an enemy (who’s at full health) from stealth.

Other than that, here’s what you want to look for with a Legendary bow.

With the Stealth archer build, the armor you use heavily depends on whether or not you’re playing Bloodied. If you ARE Bloodied, Unyielding 10000%, just because the benefits are so great. Other than that, you could also use something like Vanguard’s to hit some high resistance levels, especially if you’re playing with Instigating or Junkie’s, anything NOT bloodied (But remember, Junkie’s still benefits from high rads).

Here is some armor to consider.

By the way, quick note, if you’re wanting to use a bloodied build with Archer builds (which is where Nerd Rage comes in handy, and damage goes crazy) you’ll want to definitely stick to either Unyielding or Bolstering if you’re dying a lot.

Just like regular Armor, Power Armor also has it’s “better” versions that are pretty much just superior to the rest. If you’re rocking Power Armor with an Archer build, you’ll want to get T-65. The T-65 Power Armor provides the absolute highest amount of damage resistances as possible, but also costs a fortune in Gold Bullion to purchase all the plans, so once again, use what you can. T-60, X-01, and Ultracite Power Armors are quite easy to come across just by completing the Enclave and Brotherhood questlines.

Depending on the Mods you put on your Bow, you’ll definitely want to consider all the options of magazines that boost specific damage types.