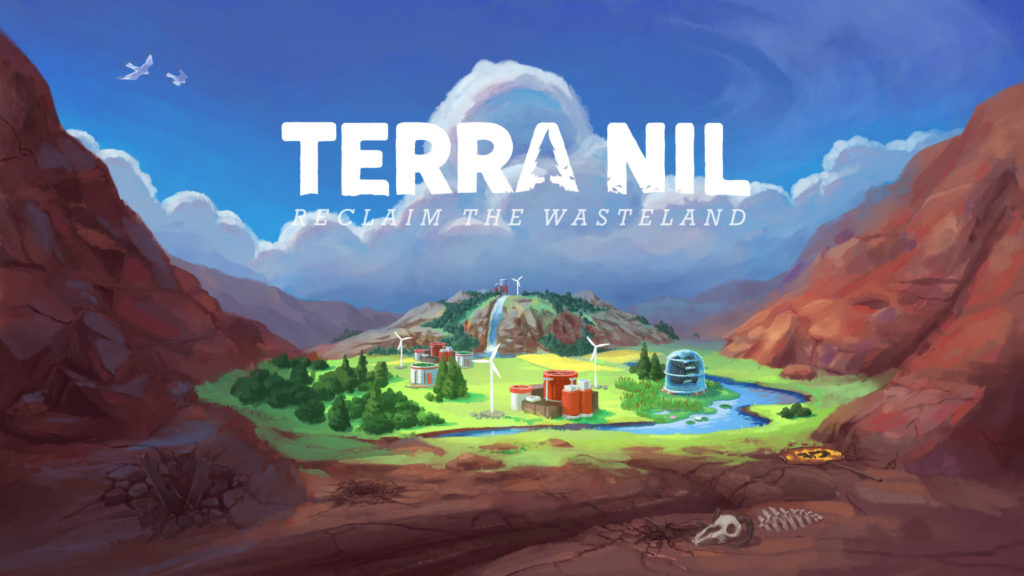 The point of Terra Nil is to transition your barren wasteland to become green and lush. There are multiple phases to this game. Below is an outline and my review of the Terra Nil limited gameplay demo.

Check out Terra Nil on Steam

Phase 1 gives you a starting budget of $1000 and 6 tools/buildings:

– Wind turbines which create power. (They go on top of rocks.)

-A ground fertilizer to make the soil plantable. They are placed within the powered areas of your turbines

-An irrigator to create green grass. This is placed within your plantable soil. Green grass also generates income

-A water pump to create rivers (which calcifiers sit upon)

Once you get your barren wasteland into a lush green area, you can move onto Phase II. 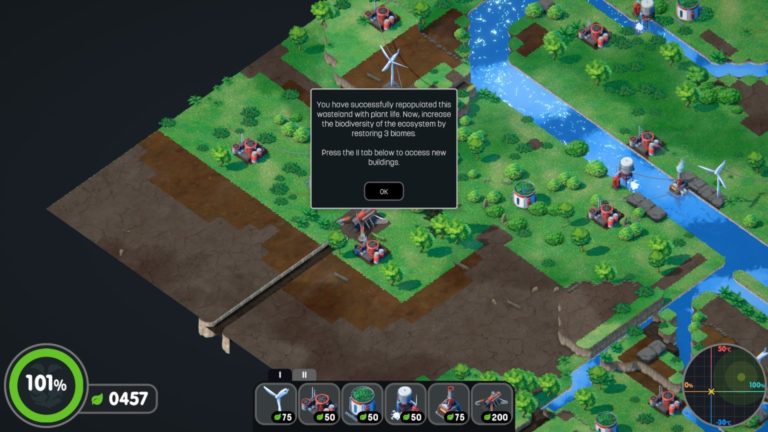 In phase two you get all new buildings. The goal here is to create three equal biomes from your phase I. A wildflower biome, a wetland biome and a forest biome. Here you get:

-A research center that makes phase I buildings cheaper.

-A Hydroponium which creates wetlands (Must be placed on top of the phase I irrigator).

-A beehive to be place on any trees in the area. This creates wildflowers.

-An Arboretum which creates forest from burned, ashy soil.

-A Solar Amplifier which gets soil prepped to be burned to ash.

-A Dessicator which burns prepped soil to ash and allows for an arboretum to be placed. 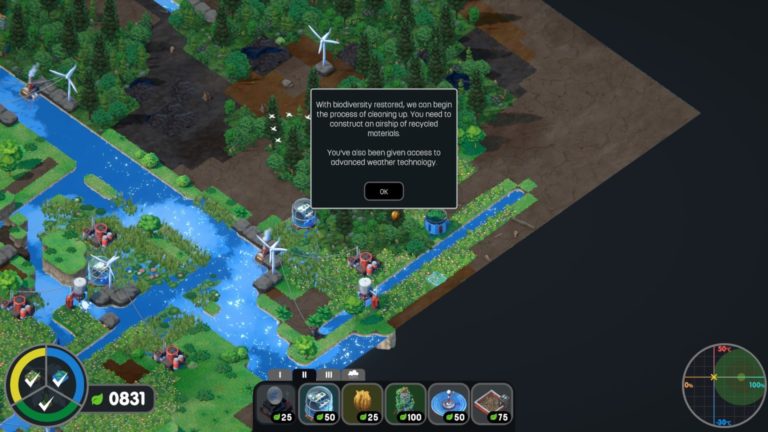 Phase III is about recycling your buildings and loading them onto your airship. For this task you receive:

– An airship (which must be built on a riverbank).

-A recycling drone (travels on the river between your loading dock and airship).

-A silo (removes buildings in the area and gives you income).

– a loading dock (recycles materials from buildings a silos to the drone).

– A pound lock (allows drones to go up and down any plateaus on the water).

You also want to use the Pilons to change your temperature into the 100% zone on your right hand mini-map. as you decrease and increase temperature your center point will move toward or away from the target. 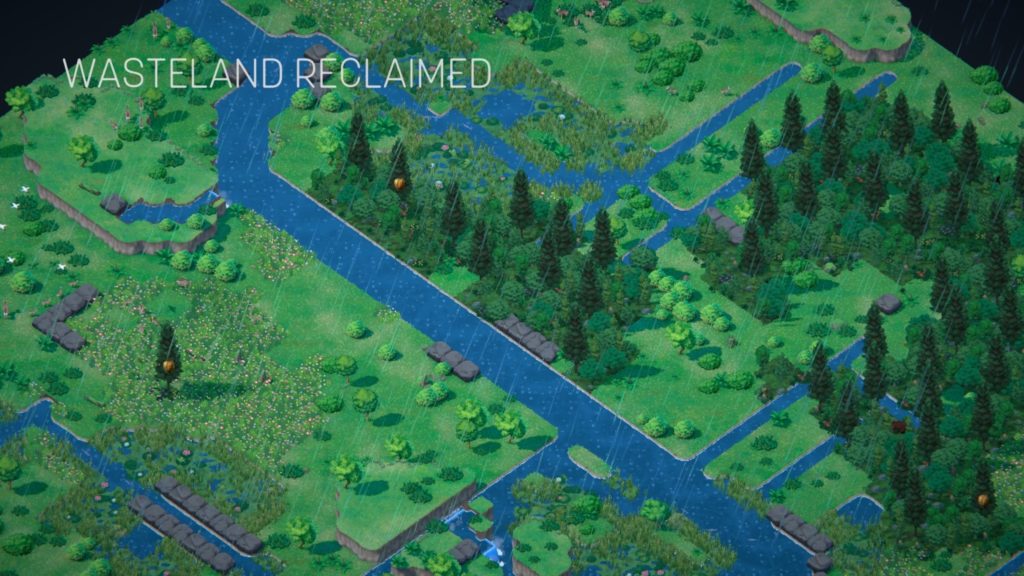 I thought that Terra Nil was interesting. When I finished the demo it looks like I still have multiple areas on the planet to restore. As this is a demo I am limited to know what happens when you click on a new area, however, it seems like I would go through the phase I-III steps on each area with the difference being different terrain. I would be interested to see if there are any gameplay affecting differences when the game comes out but if not, I don’t think this game would be something I would pick up and play regularly. Finishing the area takes less than an hour and I may find the gameplay redundant.

This is a cute concept and restoring the planet is a cute idea which many other games are getting into (think My Time at Sandrock which focuses on water conservation). I would only recommend this for light players who would enjoy an hour or so of very calm gameplay. The phase III part was probably the easiest phase and I would prefer more of a challenge in my day to day gameplay. 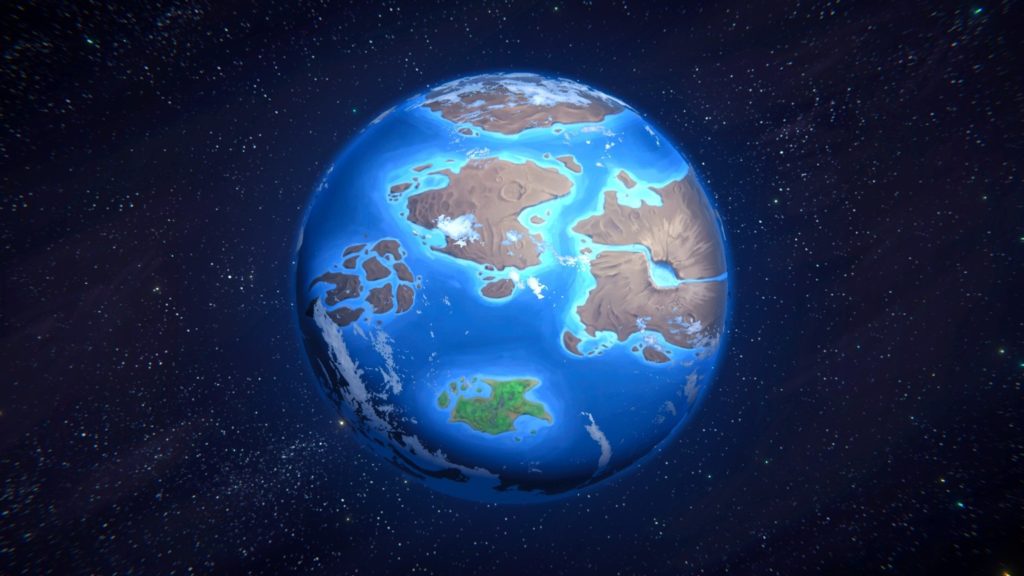