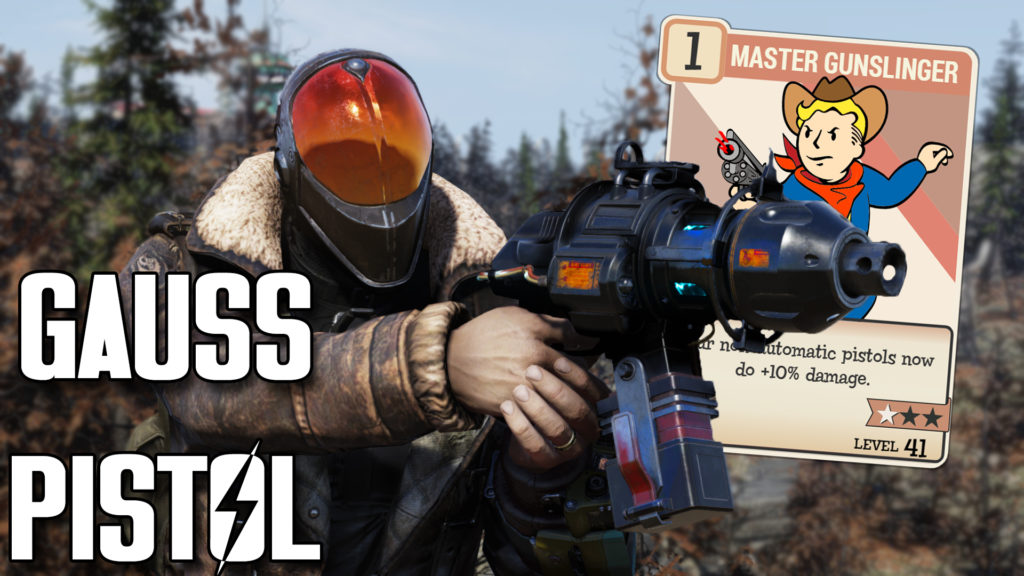 Personally, my favorite pistol out of ALL the Fallout 76 pistols is the Gauss. It does stupid amounts of damage, has a crazy good range, and the explosive damage just makes it nuttier than ever. Not the easies to acquire, but definitely one of the best to use.

The Gauss Pistol is one of those frustrating ones that you need to purchase with Gold Bullion through the Settler’s Gold Bullion Vendor at their main city. This can be an INCREDIBLY frustrating grind to get your rep up to that point, but for this pistol it just may be worth it. MAYBE.

ANYWHO! When you finally acquire the plan to craft this gun, there’s a couple different things you’ll want to watch out for when actually crafting it, and that would be the legendary perks you get. These are some of my recommended perks to watch out for.

With the Gauss Pistol build, I would recommend NOT using power armor, just simply running any kind of regular armor that you prefer. Below I’ll show you what my personal favorite armor to wear is, it’s end-game stuff though so you might need to wear some of the basic stuff if you don’t have yourself the funds to purchase the expensive ones.

Regular armor is totally up to the user on which they wear, but when we’re talking about Pistol builds… well, actually any build pretty much, you’re going to want to go with Secret Service armor, which is purchased with Gold Bullion after completing the Wastelander’s main campaign. It provides an insane amount of armor, better than anything else, and the ONLY problem is that you need to buy it at the extremely expensive price and then HOPE you roll some good perks on it.

By the way, quick note, if you’re wanting to use a bloodied build with the Gauss Pistol (which is where Nerd Rage comes in handy, and damage goes crazy) you’ll want to definitely stick to either Unyielding or Bolstering if you’re dying a lot.

Just like regular Armor, Power Armor also has it’s “better” versions that are pretty much just superior to the rest. If you’re rocking Power Armor with a Gauss Pistol Build, you’ll want to get T-65. The T-65 Power Armor provides the absolute highest amount of damage resistances as possible, but also costs a fortune in Gold Bullion to purchase all the plans, so once again, use what you can. T-60, X-01, and Ultracite Power Armors are quite easy to come across just by completing the Enclave and Brotherhood questlines.