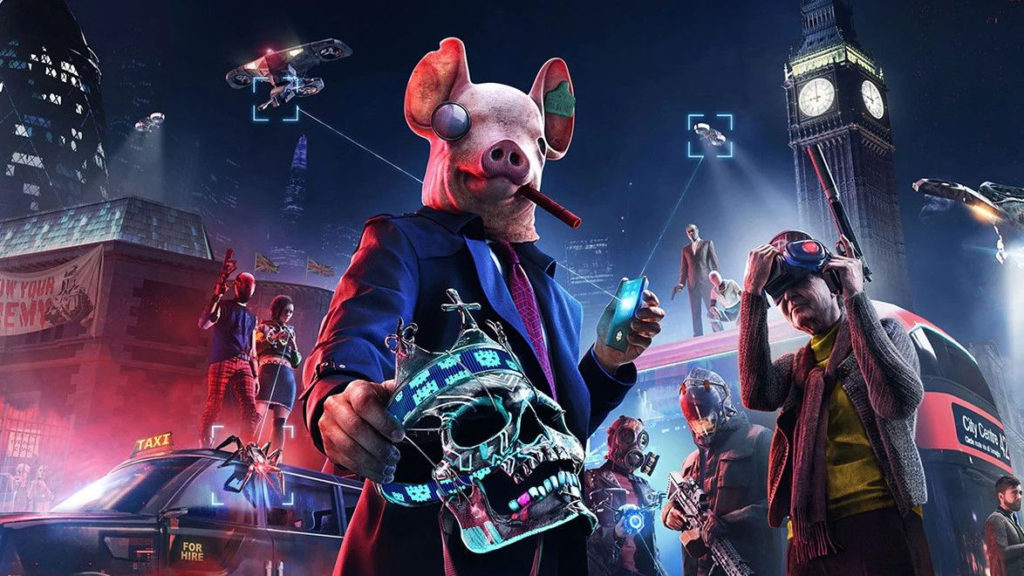 Watch_Dogs: Legion in an open world game set in near future London. The previous two titles were quite intricate with keeping a main character with a set mission and back story. This game, on the other hand, is more open with how you approach scenarios but NOT in the way you might think. This isn’t a choice and consequence based game, the story is about as in depth as Super Mario Odyssey in terms of consequence, as it’s not an RPG in the slightest. So, how exactly IS this game, and is it worth trying?

When I first stepped into the game, I was immediately impressed with the graphics, I mean, they have FULLY utilized the power of ray tracing to make the game look pretty darn good. Sadly, that’s pretty much where the “impressive” factor stopped. The game just felt lifeless, generic, and quite bland, in terms of gameplay and story. Comparing Legion to, say, the ORIGINAL Watch Dogs game, the story is beyond boring. You start off playing a spy, who doesn’t matter to the rest of the game whatsoever, and fall into having to play a randomly selected NPC character, essentially.

I was really excited for this part of the game, mostly because I felt like it would allow the player to really make the world their own, sort of like Skyrim but with TONS of characters to pick and choose from at your will. Sadly, you’ll end up retiring most of the people you choose off the bat because they are completely useless. You’ll get Bertha, who has a 6G data plan for faster downloads, but then 10 minutes later you’ll get Betty who has 6G data WITH a car she can call whenever she wants. Bertha, at this point, is totally dispensable and you might as well just permadeath her in some sort of dramatic cop chase. When it came to having EVERY character in the game to choose from, this game has the cool idea of it, but the execution is just really generic. Which is honestly sad. Of course there are required characters you MUST recruit, such as construction works or cops to carry out specific missions, but for the most part you can easily just go around as the same character and go in guns blazing.

Which brings me to the combat. Oh man, talk about disappointing. In Watch Dogs 1 and 2, you basically NEEDED to hack things in order to successfully create an easier combat scenario. In this game I literally just ran into a fight with an LMG using hipster and gunned down an entire enemy base, as to which I took all their money and stole their sport car to make my exit. I hate to say it, but at this point in becomes nothing more than another GTA like game, because the hacking isn’t really all that essential outside of main campaign missions. You’ll hack the occasional lift or trap, just for convenience, but for the most part (and I’m playing on the hardest difficulty), it just ends up being guns blazing.

Now, one thing that this game DOES get alright is the open world. Combat and Story are one thing, but when a game can’t properly create an open world for GOOD exploration, that’s a big ol problem. Heck, that’s one of the reason Fallout 76 still sells well, because DANG that’s a solid open world. As for Watch Dogs Legion, it’s okay at best. I feel like you still get those beautiful and cinematic rainy downtown nights, but during the day the city can feel empty or “flat”. When I say flat, I actually mean FLAT. You know the feeling of terrain and altitude that games world like GTA V, Oblivion, and Assassin’s Creed Odyssey give? This game fails miserably in that department, and if I didn’t know any better I’d say the map was a pancake the entire way across. When you’re flying on a cargo drone you can SEE it. Everything is so flat and basic, if not for the gorgeous architecture and design of the city, this would be one of the worst open worlds I’ve ever played around in. Sure, you could argue that this is just how the city of London IS, but come on, Watch Dogs 2 featured an entire outskirts of San Francisco to explore, whereas this game is just one big city map the eventually feels repetitive as you drive around. Like I mentioned, the architecture is amazing, gives the city a completely unique feels to most other games out there, but other than that you’ll want perfect graphics to make the open world interesting to explore.

As for exploring, that is done mostly through questing because there is NO reason to go to most places in the city unless they have either some little loots to collect or an actual quest. So, lets talk about questing.

The majority of your quests will be recruitment quests, which are fun at first, but you’ll soon recognize that you’re doing the same quest OVER and OVER again, like they’re incredibly limited to how those play out. Which is sad, considering how much they could’ve done with this sort of system. The other thing that completely breaks immersion with recruitment quests is the interaction. Haha, you just gotta see it to believe it. You are a super undercover spy society, yet when you literally JUST say “hi” to some 80 year old granny, she responds with, “YOU’RE WITH DED SEC, AREN’T YOU?!?!?!?!?” like… how does she even know? And immediately after she screams to the world that you’re Ded sec, she’ll go into this massive (and very similar to everyone else’s) story about some absolutely insane problem she has. There’s not a normal soul in the entire city.

Other than recruitment quests, you’ll have a lot of small side tasks given to you by members of Ded Sec OR just little things you can do for money, which I wouldn’t consider “side quests” as they’re not really given to you by anyone that matters. Like a boxing contest, you can simply go around winning boxing tournaments (as a granny if you so choose!) and get money or potential recruits. Besides that, there’s just a bunch of little items to collect around the world to give your character hacker tools or perks, maybe enough money to buy yourself a good hat or something.

I like to keep my reviews short, and this game, sadly, just doesn’t hit a whole lot of reasons to play. The game just feels very empty, like it’s relying solely on the recruitment system to carry the game, but it’s just not down as good as it could’ve been. Maybe playing with buddies it’d be a good time, but that shouldn’t be a selling point for a mostly solo experience. All in all, Watch Dogs Legion is a GORGEOUS looking but incredibly bland game that just falls so short of what it’s previous title delivered.

Here's a Video on my experience