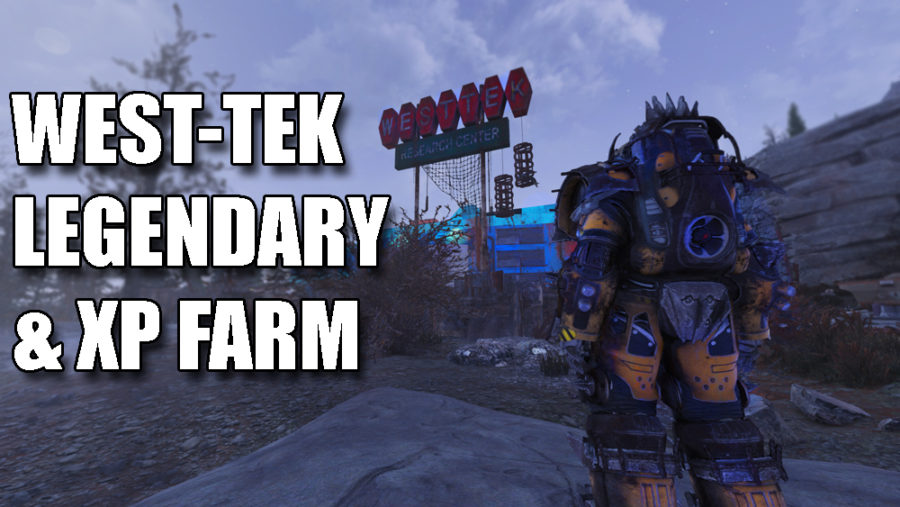 West-Tek is hands down one of my FAVORITE Fallout 76 locations to farm not JUST Experience, but also Legendary’s. This location is filled with Super Mutant enemies, armed to the teeth with assault rifles, Super Sledge Hammers, and the occasional mini-nuke strapped suicide Mutant. There are PLENTY to kill, which makes leveling here a breeze.

After you fight (and kill) plenty of the Super Mutants OUTSIDE the building, some of which MAY be actual legendary’s, you will head to the main big red doors, with a turret that will shoot you as you walk towards them. ENTER THE BUILDING TO FLEX ON THE TURRET

Once you enter the building, you’ll have a choice to either head straight, or turn to the right. Either path you choose to go, you’ll want to end up in the same room. If you go straight, you’ll end up in room 5, and you’ll want to head right into room 7. If you turn right, you’ll head through room 6, and then turn right to the room RIGHT before room 7. This room will typically have a Nuka-Cola cooler stocked, and a couple of dorky Mutants with their stupid sledge hammers.

As you continue down the path to room 7, this is where the first REAL big fight will happen. There will typically be 5 or so Mutants up on top layer, and another 5-10 mutants swarming the bottom, right where you enter. I’ve had legendary’s spawn in this room before, especially upstairs, where you will link up with the chemistry station room AND the “Final” boss room, with a crowned Super Mutant. Sometimes, there will even be a legendary in that room with him.

After you finish up with these locations (REMEMBER TO BREAK DOWN THE LOOT AT THE CHEM STATIONS), you can head to the next location, ROOM 8. This room can be quite tricky to understand, as enemies can shoot you from practically ALL angles… but then so can you. This room typically has anywhere from 10-15 Mutants waltzing around, and definitely has a chance to spawn Legendary’s. Also, a side note, there is a tinkerer’s work station located on the bottom floor at the end of the long grated walkway, another chance to decon or craft supplies.

After you clear out room 8, (Room 11 typically has nothing important to bother with, just a side note) you’ll want to head to the door inbetween room 8 and 12. There is a terminal that doesn’t need to be hacked, just simply open the door BUT REMEMBER that it will close after a few seconds, and once you enter, you can’t go out the same way. Be prepared for a fight immediately after opening the door, as there are swarms of mutants in each and every room, from 12-17.

USUALLY the mutants will all run out of their rooms once they hear gun shots, so you can clean em all up in a bunch. Room 17 is known to have Legendary’s spawn, as well as the floor ABOVE 17. There are more Chem stations in 15 to deconstruct items, as well as PLENTY of Aid containers scattered throughout the area, so make sure to loot those up!

Besides all that jazz, once the Mutants are all cleared, you’re free to head back outside and celebrate the glorious slaughter you just involved yourself in. I usually get anywhere from 1-6 legendary’s spawning here, all at end game level, and I’ve gotten MANY 3 star legendary’s from this place. There will be the occasional time when RNG will curse you and you’ll end up with just a bunch of lousy mutants, but hey, it’s still great XP. This Fallout 76 West-Tek Farm is hands down my first go-to location.

Enjoy the grind, and best of luck in getting your two shot, furious, explosive, quad ammo, + 1 Strength Barbed Hook!